While the jury's still out on its looks, our practical Skoda puts the boot into car boot sale! 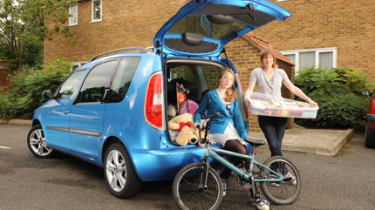 Roomster by name, roomy by nature! Our long-term Skoda certainly didn’t let us down when we loaded it up for a car boot sale. Having had a clear-out prior to redecorating my daughter’s bedroom, we couldn’t believe how many clothes, books and toys there were to shift.

Even after throwing some of it away and donating other bits to charity, we still had loads of kit to get rid of. And as with any teenager, Natasha is always looking for ways to raise money – so a car boot sale was the obvious solution.

We loaded the Roomster the night before, ready for an early start, and everything went in without a hitch. Unfortunately, the British weather didn’t prove as reliable as the Skoda, because we woke the next day to extremely dark skies and pouring rain – so sadly we were forced to abandon our plans.

The Roomster’s large tailgate would have made a great makeshift shelter from the rain, but we’d probably have been the only people there! While I love the Skoda’s practical design, I’m still not a fan of its looks. The tall sides come into their own when you need to use the space, yet they mean it has a van-like appearance from the back.

Inside, the rear seats are incredibly easy to adjust. You simply press a lever on the side of each chair and they fold flat immediately. The load area can be increased even further by releasing the rear of the seats and tumbling them forwards behind the fronts. Once again, this is easily done by pushing the metal bar at the back, and then lifting them forwards.

Since my previous report in Issue 1,010, the keys to OY08 WZC have been shared around the office. And while the Skoda is not at the top of many people’s weekend wishlist, I have heard very few complaints when the fob is handed back.

The diesel unit is still rather noisy, but the Roomster cruises capably on the motorway and proves adept in town. Economy has improved – to 37.4mpg – and although this is still some way short of the manufacturer’s claims of 42.2mpg, it’s not too bad considering the amount of city traffic the car encounters.

I’ve also noticed how popular the panoramic sunroof is with other staff in the Auto Express office. It’s wasted on me as I always have the blind shut when I’m in the car – for some reason, I find all that light a bit disconcerting! But whenever I get the Roomster back from someone else it has always been pulled back, so the sunroof is clearly a hit with other drivers.

As you would expect from a brand that always does well in our annual Driver Power customer satisfaction survey, genuine faults have been few and far between. The only problem we have encountered so far came while the Skoda was in the hands of staff writer David Wrottesley, who suffered a rear tyre puncture. However, Kwik Fit repaired this swiftly for only £18. If only the British weather was so easily fixed...

Second opinion: Ask anyone about the Roomster and the talk will invariably turn to the Skoda’s looks. They never cease to divide opinion – but I am a firm fan. The boxy rear is completely at odds with the stylish front end, yet the quirky result is unlike anything else on the roads. Our example’s dark-tinted privacy glass definitely helps make things a little sleeker, although even without it the Roomster is an incredibly distinctive choice. The Skoda also works well on the inside, where there is loads of cabin space.