The Skoda Roomster: chic or freak? Some have taken to wearing disguises to avoid being seen in it, but despite the debatable looks, it’s still proving its worth 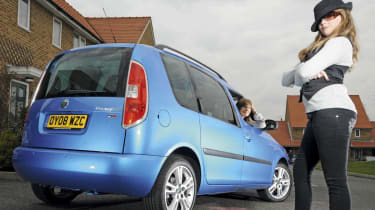 Ok, so Skoda is no longer the butt of jokes in the car industry, but the arrival of a long-term Roomster wasn’t greeted with smiles of delight in my household.

Along with the curious name, the unusual styling did little to convince my teenage daughter Natasha that the car is cool enough to be seen in. In fact, its looks have caused heated debate among the Auto Express staff, with opinion split on whether it’s funky or flawed.

Our model is a top-spec Roomster 3, which includes standard 16-inch alloy wheels. These look good in themselves, but seem too small for the slab sides, and this accentuates the strange proportions. It’s not all bad, though – the Ocean blue metallic paint is bright, while the tinted rear windows add a classy touch. Inside the Skoda’s solid build quality is clear. The facia is finished to a high standard and although the black plastic is oppressively dark, the rest of the cabin is airy.

This is partly due to the large windows, but mostly the optional Sunset roof, which features a clever split blind. It allows front and rear occupants to make their own choice on how much light they want.

The large rear pillars do impair visibility, but reversing is no problem, thanks to the acoustic parking sensors which are standard on this flagship model. Receiving the keys just in time for the bracingly cold Easter weekend, I would never have guessed how grateful I would be for the heated seats – there are two levels and they warm up incredibly quickly. The £140 option has even won over my daughter – she’s the only person who can keep it on the warmest setting for more than a couple of minutes!

The front seats are supportive, and as both the driver’s chair and steering wheel are adjustable for height and reach, getting comfortable is easy. The only downside is that the fabric seems to attract dirt, and keeping the seats fluff-free has already been quite a challenge. As our Roomster arrived with only 81 miles on the clock, the engine is still being run in. The 1.9-litre diesel is noisy, but capable around town, where it spends most of its time. As a result, I’m not too disappointed by the 35.9mpg average – Skoda claims a combined return of 42.2mpg.

The boot is much larger than that of the Nissan Note which I ran previously, and the small plastic divider is handy if you are only carrying a couple of bags. As yet I haven’t had a chance to put the storage space and folding rear seats to the test, but with a car boot sale and weekend trip to Wearside scheduled in the coming months, the Roomster will have plenty of opportunity to prove itself.