Revised family wagon promises frugal flexibility and a fun drive. But does it deliver? 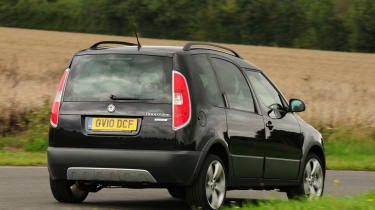 FEW family workhorses are as enjoyable to drive as the Roomster. Its turbocharged engine feels sportier than you might expect, and anyone who has doubts over the looks should check out this more appealing beefed-up Scout variant. There are newer, more innovative MPVs around, but the Roomster is an honest, practical model designed to survive the rough and tumble of family life. Although in this specification it’s pricier than more basic rivals from Renault and Citroen, it injects a big dose of fun into the class.

Scouting for flexible family transport? Then look no further than Skoda’s facelifted Roomster! We tried the Scout 1.2 TSI, which features an engine that has already impressed in our Yeti long-termer. Does it work as well in the cheaper MPV?

The Roomster’s van-like looks sparked great debate on launch in 2006, yet have softened over time. Our trim’s chunky plastic bumpers and big wheels add a reassuring, rugged feel to the quirky styling. The car also gets a wider honeycomb lower grille, revised foglamp surrounds and LED daytime running lights.

Inside, the high driving position, logical dash and wraparound screen give the cabin a light, airy feel, as do the enlarged windows and sunroof – the latter a £560 option. The rear seats, meanwhile, are mounted higher than the fronts.

The 4.2-metre Roomster is even shorter than the Fabia estate. But its long wheelbase lets it swallow up to 1,780 litres of luggage (300 litres more than the estate), depending on the seating arrangement. Each of the seats can be removed via the two-touch ‘VarioFlex’ folding system, too. The only letdown is the narrow middle rear seat, which is useful only for short trips. It does double up as an armrest with cup-holders, though.

A five-speed manual box is standard, but our car had VW’s £710 seven-speed DSG auto, which combines fantastically with the 105bhp 1.2-litre engine. The perky motor has a lively exhaust note, and despite lacking a little torque, it’s highly engaging to drive. Selecting ‘D’ lets it become a full auto, ensuring hassle-free journeys.

The steering is well weighted, and because of the light 1,271kg kerbweight, the car feels agile and is easy to thread through city traffic. This is yet another Skoda that’s among the class leaders, and is a great addition to the Czech firm’s increasingly strong line-up of unfussy, reliable machines. The Yeti, our current Car of the Year, might be getting all the plaudits right now, but the Roomster is better than ever.