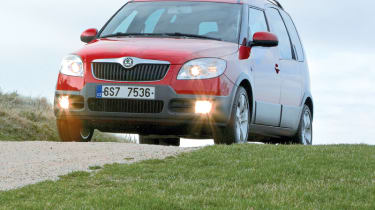 We're already Roomster converts here at Auto Express, and the Scout is sure to boost the appeal of the MPV line-up by combining off-road looks with supermini running costs. Don't pay too much attention to the tough styling additions, though, because this car is no 4x4. It is well suited to tackling the urban jungle, however, as the standard car's spacious interior is as practical as ever and its tidy road manners are unaffected.

Pumped-up crossover models must be the flavour of the month at Skoda. Only weeks after driving the Czech manufacturer's Octavia Scout, we have managed to track down the Roomster version. We are big fans of the standard car, so does the Scout model do its duty?

Don't be fooled by the butch off-road styling, because Skoda's MPV retains the front-wheel-drive set-up of the standard machine. The tough-looking plastic cladding fitted to the lower body is more suited to providing protection from supermarket trolleys and car doors than off-road rocks and boulders!

And while the Scout is taller than the ordinary model, that's down to its smart new roof rails, rather than any changes to the suspension. The styling tweaks do suit the Roomster's chunky appearance, though, and its neat alloy wheels and plastic bodykit help to give it a purposeful look.

Skoda used the mid-range Room-ster 2 as its basis for the new mach-ine, and there is plenty of extra kit inside. The seats are upholstered in a special Scout cloth, while branded floor mats also feature. Climb behind the wheel and you will even find a leather steering wheel and gearknob, along with aluminium pedals.

The list of safety equipment has grown as well, with ESP and a tyre pressure-monitoring system also fitted. Buyers have a four-strong engine line-up to choose from: petrol fans get the option of the entry-level 85bhp 1.4-litre unit or a more powerful 105bhp 1.6 powerplant. Oil-burners comprise the firm's 80bhp 1.4 TDI and the quieter flagship 105bhp 1.9 TDI that we drove.

On the road, there's nothing to tell the Scout apart from the ordinary Roomster, which is no bad thing. The suspension set-up is unchanged, so the firm ride is just the same as before. It ensures nimble handling and decent body control in corners. Performance is far from blistering, but the vocal diesel engine has plenty of torque from a mere 2,000rpm. The car is perfectly capable of keeping up with surrounding traffic and is surprisingly refined at motorway cruising speeds. However, the breathless lesser models need to be worked hard to keep pace, which can make for slow progress when you have a full complement of passengers on board.

We also tried the 85bhp 1.6-litre petrol unit, which has a rorty soundtrack and revs smoothly to 6,000rpm. As with the diesel variant, its five-speed manual gearbox is light and positive, and visibility is excellent.

The tardis-like interior is where the Scout really scores, and the flexible seating, vast space and stylish design compare favourably to rivals. It all feels like it is built to last, while the classy two-tone dashboard is streets ahead of what other MPVs in the budget marketplace can offer.

There are plenty of storage cubbies, too, while bigger loads are easily accommodated in the 450-litre boot. In addition, the individual rear seats can be removed to free up a van-like 1,780-litre load space.

Air-conditioning comes fitted as standard, but climate control is a £250 extra. Other options include reverse parking sensors (£240) and cruise control (£150).

Prices start at £12,505, and our range-topping diesel will set you back £14,050 - the same price as the slightly better equipped Roomster 3. If you prefer the Scout's chunky styling, it's a small price to pay - just don't take it off-roading.