Which manufacturers make the best cars to own? More than 46,000 readers reveal all... 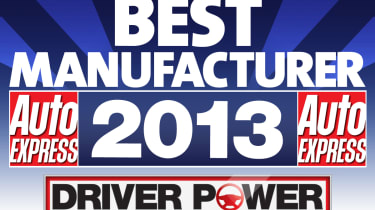 We've already revealed which cars make their owners happiest, so now it’s time to rank the brands behind the models.

To do that, we combine all the scores you gave each manufacturers’ cars to get an average mark – and whereas only cars with enough responses featured in our Top 150, this chart includes every model that registered a vote. We then rank the top 32 brands.

There have been plenty of surprises over the past few years, but one thing has stayed consistent: Skoda has topped our survey for four years in a row, with stiff competition from Lexus and Jaguar. With the Yeti and Superb heading the Top 100, can anyone beat Skoda’s overall score? And how did the maker of your car fare? Here are the results…

All hail the new king of Driver Power. A one-place rise doesn’t seem like much, but toppling Skoda is a great achievement. The Czech brand has no weak spot on its scorecard, while Lexus – like all the premium marques – is hamstrung by low scores for running costs and practicality. Yet despite these weak spots, it was able to make up ground in other areas. Key to that was finishing first in three categories – reliability, build quality and in-car tech – and taking silver for ride quality and ease of driving, too. Clearly, owners can’t praise their cars enough for their premium qualities – they’re expertly put together, packed with gadgets and a pleasure to drive. It’s a very well earned victory for our new Driver Power champion manufacturer. And we can’t wait to see whether Lexus can hold on to its crown in 2014.

It’s finally happened – Skoda has been knocked off the top spot in our Driver Power rankings after a remarkable four-year run. So what went wrong in 2013? Well, the short answer is: nothing. Owners certainly aren’t complaining about their cars – Skoda has by far the most consistent scorecard, and is the only brand that managed to finish in the top 10 in every category. It picked up gold medals for running costs and practicality, a silver medal for in-car tech and bronzes for ease of driving and braking. Its worst score was eighth place for handling. On top of that, the Yeti and Superb took first and second place in our Top 100 last week, so Skoda’s performance in Driver Power 2013 was just as phenomenal as in previous years. The only thing that’s changed is that another brand managed to go one better...

Three brands have dominated Driver Power in recent years, and they’ve retained their grip on the podium in 2013. In fact, their dominance seems to be growing – 2.36 per cent separates our bronze medallist from Mazda in fourth, and that’s as big as the gap between Mazda and Alfa Romeo in 17th. Jaguar’s 86.39% score is exactly the same as in 2012, and in another repeat of last year, it picked up gold medals for ride quality and ease of driving. It also notched up five other top 10 category rankings, but there’s still room for improvement. Low scores for practicality and running costs are no surprise, but 15th place for reliability is a black mark on an otherwise pristine scorecard. Its chief rival for the best premium marque crown is Lexus, a brand renowned for its reliability, so this is an area that Jaguar has to address.

The Driver Power 2013 wooden spoon goes to Smart. It’s not all bad news – the company picked up a silver medal for its cars’ running costs. But there’s little else to celebrate. Owners who took part in the Driver Power survey delivered a savage assessment of virtually every other aspect of the company’s ForTwo model. Smart took last place for ride quality, 31st for practicality and ease of driving, and 30th for braking and handling. You wouldn’t expect a city car to win many plaudits for its practicality, but such a low rating for ease of driving is dismal.

How are our results calculated?

Our survey asks drivers to rate their car out of five in 10 key categories. An independent data processing company then crunches the numbers to provide the overall average scores.

Why doesn’t my car feature?

Not all models can be included, due to the sheer number of cars on UK roads. Plus, to ensure our results are reliable, we need a robust sample size of drivers of each vehicle.

See the results for previous years…