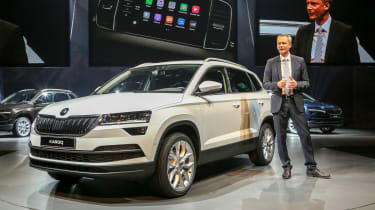 Designing, building and developing new cars is a long and arduous task. The process, from beginning with the very idea of a new car to it being handed over to a customer, can take up to 10 years.

The man in charge of overseeing development of every new Skoda – including the new Karoq – is Christian Strube. He’s been the board member for technical development at the company since 2015, having held various engineering positions within the VW Group since 1991. Auto Express sat down with him to discuss his latest project, the Karoq.

How much Volkswagen is in the new Karoq?

“The Karoq is based on the MQB platform from the VW Group. But the development of this compact SUV was done by our technicians in Mlada Boleslav. Also, the SUV design is typical Skoda. The production takes place in Kvasiny in the Czech Republic; an additional production line was opened this year in Mlada Boleslav due to the high demand. The Karoq is a Czech product with German aspects.” 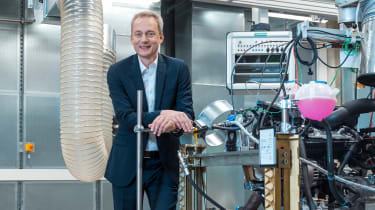 How many locations worldwide were visited for development of the Karoq?

“The first location where we test new vehicles is traditionally the first floor of our development building in Mlada Boleslav. That sounds weird, but at the time, the vehicle is only available in the computer. The possibilities of virtual reality save us a lot of time and money. No one has counted the later locations, but what matters is that the Karoq fulfils the requirements in all regions of the world. Therefore, the driving tests were also carried out in many countries. Temperatures ranged from minus 40 to plus 55 degrees Celsius. And it is not only the temperatures that are challenging. [The car is] tested in drought, rain, snow and ice, in the mountains, on asphalt, on cobblestones, on sand, gravel – on any conceivable surface.”

From start to finish, how long does the process take?

“Strategic product planning takes about 10 years. It takes about three years from the final idea to the first ride on the road. The duration of the development process is also determined by the market. If it has to happen quicker, we work for 24 hours, through the night. The virtual reality technology helps us decisively.”

What were the biggest challenges you faced with testing the Karoq?

“To make the car as successful as its big brother, the Kodiaq. And I’m sure we’ve succeeded.” 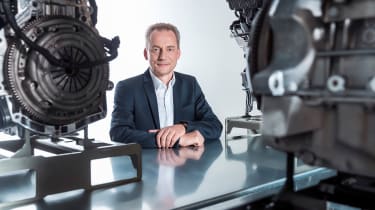 How many miles did prototypes cover during the development phase?

“We drove around 2.5 billion miles for testing. This gives us the best feeling of how the car changes over a long time. The average age of private cars in Europe is between nine and 15 years. Our customers expect high-quality, reliable cars throughout the entire ownership period. Our target is to offer just that.”

How many prototypes were used for testing? Did they all survive?

“Our prototypes help us to develop the best model. This is necessary for the departments developing items in parallel like electronics, engines, aerodynamic, chassis, safety and more. The chances of survival of the prototypes are very different. The one who pulls the crash test card has a short life.”

Is the hope to find issues with the car and to fix them or to have a smooth and trouble-free test?

“Of course, we like [trouble-free] tests because they show that we planned well. This is a huge challenge in the large number of tests carried out. We test engines, chassis, transmission, Noise, Vibration, Harshness (NVH), comfort, safety, assistance systems, etc. in all possible conditions. This includes checking the build quality and performance of all features.”

What problems did you encounter while testing? How were they resolved?

“Due to the experience with the Kodiaq, there were no significant problems in the testing of the Karoq. However, if we find things that do not meet our quality standards, we will change them immediately. No car gets the production approval if its quality is not 100 per cent.”

Does every Skoda go through the same development testing?

“Most tests are identical. But of course special test procedures are needed for specific types of vehicles.” 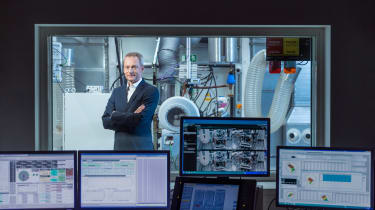 What was unique about the testing procedure of the Karoq?

“The Karoq had the same test procedure like all other cars. In addition, the off-road characteristics, the 4x4 drive and the towing capacity were tested. Our SUV and Scout models have an off-road mode that affects suspension, braking or accelerator pedal settings, for example when the Down Hill Function is activated. Special features like these were also on the test list of the Karoq.”

How and when is it decided that development testing is over? Who decides?

“The test process is clearly structured from start to finish. Only when the last item on the test list has been successfully checked in coordination with the quality assurance department will production be released. The last step is the confirmation of the board members.”

How many mechanical changes were made during testing?

Do you enjoy the development process? What is your favourite element?

“For me, the pre-development phase is particularly interesting and, above all, the fascinating possibilities offered by virtual reality at a very early stage of development. The developers could only dream of these possibilities in the past.”

The development of the engine and chassis of the Karoq was in extremely safe hands under the direction of Dr Martin Hrdlicka, who heads up the chassis and powertrain department at the company’s Czech base of Mlada Boleslav.

Dr Hrdlicka is steeped in Skoda; his grandfather Karel was the firm’s first CEO in 1929, while his father Petr was responsible for developing the Favorit, the front-engined car which persuaded then Volkswagen CEO Dr Carl Hahn to buy the company back in 1991. 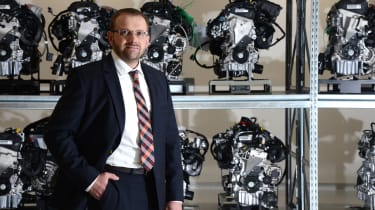 Dr Hrdlicka acknowledges that his team had a significant role to play in the Karoq – “Maybe 60-65 per cent of the car is my responsibility,” he says – and explains that the process, as with any car, is one that evolves over many years.

He tells Auto Express: “[It starts] with the decision [to make the car], the concept works, how big the car will be, the aerodynamics. Then we have to take into account what the weight will be, how the wheels will be, estimate the CO2 emissions and the consumption.”

As Skoda is part of the Volkswagen Group, Dr Hrdlicka has an array of engines and technology at his disposal. But it’s not just a case of cherry-picking. “The discussions about the portfolio of engines and gearboxes are very important because it defines the complexity not only for me, but also the complexity for the production plant,” he says. 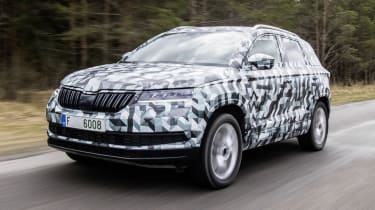 “If you have a volume of cars you have to sell in a year – say 100,000 – it is not possible to have 100 different engine and gearbox variants. This would cost too much per car. You have to keep the complexity low, but on the other hand we would like to have some range and not only in the EU, which is our biggest market.”

Different markets clearly have different priorities, but in Europe keeping emissions low is a major driver. That is reflected in the UK line-up, where 1.0 and 1.5-litre petrol and 1.6 and 2.0-litre diesel units are offered.

Once it’s been decided which engines are suitable for which markets, Dr Hrdlicka says there is one clear directive for his team. “We have to prepare the car for implementation of the engine. What that means is our task is not to change the engine. When you start to develop a new car, we try to change the car so that the engine can work unchanged,” he stresses.

“We don’t want to create a new sort of engine only because of Skoda. The job of the corporation is to produce high volumes of almost the same engine.”

Of course durability is essential for engines, which is why Skoda invested 45 million Euros (around £39.5million at the current rate of exchange) in a state-of-the-art engine testing centre in Cesana, close to its Mlada Boleslav HQ, which opened in 2014. 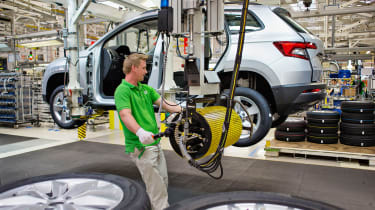 Walking through the centre, which is as pristine and orderly as you’d expect of a facility that’s been running for only four years, you get an idea of the sheer extent of testing that goes on. There are 15 test benches for engines and six for gearboxes where individual parts are constantly assessed for functionality and durability.

Dr Hrdlicka’s pride is evident as he shows me a stripped-down three-cylinder engine, used in Skoda’s Citigo and Fabia, which has done a 500-hour session on the test bench. Apart from some minor discolouring, to the untrained eye it looks pretty close to as good as new – a tribute to the quality of what is produced.

Of course, while there is a degree of uniformity with other VW Group brands with the engines, the chassis set-up offers major scope for differentiation. That is evident on the Karoq, which has a far more comfortable feel than its sportier SEAT Ateca sister car, for example. While it would appear to make sense for the Group to offer a different ‘flavour’ with every brand, there is no diktat from VW HQ.

“We have our own Skoda strategy,” confirms Dr Hrdlicka. “ We would like more comfortable cars. But we don’t want to be too soft; it is a trade-off.” This means unique development of the shock absorbers, specific hardware parts, steering, springs and stabilisers, plus different calibration of the ECU and electronic stability control. 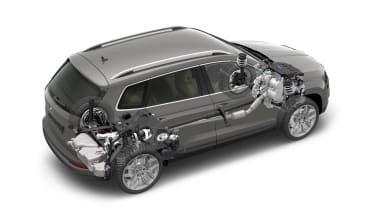 Perfecting that balance is a task that, as Christian Strube revealed, involved 2.5 billion miles of testing for the Karoq. “The chassis developers live on test tracks across the world,” says Dr Hrdlicka. “Normally we look twice a year in winter and twice a year in summer. That’s a lot of travel.”

Listening to him recount the countries visited in the Karoq’s development gives an instant idea of how demanding the schedule is. South Africa, USA, Sweden, Norway, Finland, Spain and Italy are reeled off immediately. But he says one destination in particular is critical to any car’s development: “The Nürburgring [in Germany] is not only a race track; it is very important to do a good set-up. You get all the info at once. I can’t imagine developing something without visiting the ’Ring.”

All the effort has paid off with the Karoq, which is a decent car to drive that offers a high degree of comfort. To that end Dr Hrdlicka and his team have met their brief perfectly – another model that can be added to his family’s rich legacy.

Read our in-depth review of the Skoda Karoq…