10 things you didn't know about the Skoda Karoq

Think you know everything about the Skoda Karoq? Think again... 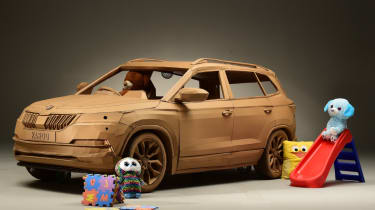 Our Karoq special contains everything you need to know about the new Skoda SUV, almost. There are still a few facts that slipped through the net so we’ve gathered them together here. Below are 10 fascinating facts and figures that define the cool new Skoda Karoq SUV.

1. The name Karoq comes from the language of the Alutiiq – a tribe native to Kodiaq island in Alaska.

2. It is available in SE, SE L and Edition trims, plus a fleet-focused SE Technology. All come equipped with LED rear lights, dual-zone climate control and alloy wheels as standard.

3. The mid-size SUV market in which the new Karoq competes is now the second biggest sector in the UK.

4. Karoqs are built alongside the Superb and Kodiaq in Skoda’s facility in Kvasiny, Czech Republic. At full capacity, the plant can build 280,000 vehicles a year.

7. All models can be specified with Skoda Connect, which allows owners to integrate mobile online services, satellite-navigation, information and entertainment.

8. The Karoq is one of the safest compact SUVs on the road today. Crash test expert Euro NCAP gave the car a score of 93 per cent for its protection of adult occupants, along with a five-star rating overall. Standard safety systems include Front Assist with City Emergency Brake, electronic tyre-pressure monitoring, seven airbags, stability control, Multi-Collision Brake, and XDS+, which is an advanced electronic differential lock function that is designed to enhance traction.

9. The Karoq is being launched with a range of 13 colours, including Energy Blue, Emerald Green and Velvet Red. Customers can also personalise their car with a vast range of options, including a heated steering wheel, electrically folding tow bar, Park Assist, and Adaptive Cruise Control.

10. There is a life-sized cardboard Karoq comissioned by Skoda tailored to the wishes of children. Read on below for more details.

This ingenious cardboard creation was inspired by children’s wishlists for the car. We had a look around a true work of art. 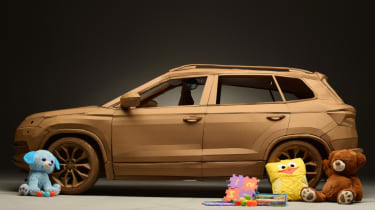 We’ve already seen how much effort Skoda put into its new family SUV, but how different would it be if the car had been designed by some of the family members who’ll use it – the children, in particular?

Here’s the answer. Called Kid Karoq, it was inspired by a survey of 1,000 under-11s commissioned by Skoda; and when, as part of the study, almost three-quarters of them said they’d built their own cardboard creations, the company discovered its inner child.

Keen for its own cardboard car, Skoda commissioned Liam Hopkins of Manchester-based designer Lazerian to build Kid Karoq, and it’s a work of art. It’s exactly the same shape and size as the real thing, and we can only marvel at the breathtaking attention to detail.

For example, just look at the intricate folds and interlocking pieces of cardboard on the door mirror housings. The wheels could pass for a piece of sculpture, and we love the ingenious way the tyres have been given a tread pattern. 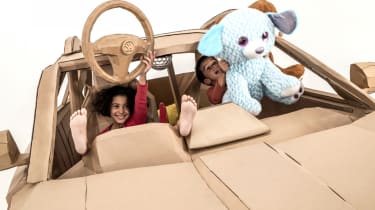 Liam put 600 hours’ work over 10 weeks into making the car, and had time to add some of the youngsters’ most popular demands.

So, inside you’ll see a ball pit in the boot, complete with a slide. And, to allow the kids to play their own music, stream TV programmes and play games, there’s a tablet mounted in the centre console, linked to a set of wireless speakers. On top of that, a games console sits in the dashboard, a film projector shows movies, and hanging from the roof is a disco ball, instead of the regular car’s more conventional interior lighting.

Last, but not least, there’s even a secret den under the bonnet, so that the kids can watch the world go by through spy holes in the headlights without being seen.

Kid Karoq can certainly teach Skoda a thing or two about what its customers want. But, if there’s one thing it shows above all else, it’s that the best car design is just child’s play.