The seven-seat Skoda Kodiaq Scout SUV adds a dose of rugged style and extra kit, but how does it drive? 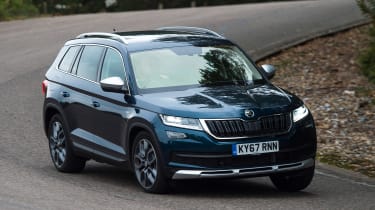 Make no mistake: the Skoda Kodiaq is a great car and still our favourite large SUV of the moment. However, we struggle to see the value in opting for this pricey Scout trim, as the upgrades are far less extensive than on the Octavia and Superb. The standard 4x4 offers enough off-road ability for most buyers’ needs, and – bar the styling add-ons – most of the kit is available as an option on cheaper versions of the Kodiaq.

Skoda’s Scout sub-brand isn’t exactly an original theme in the Volkswagen Group, with Audi, VW and SEAT all offering similar off-road-ready versions of existing models. Yet the idea has always fitted best with the Czech company’s practical and no-nonsense approach. The Octavia and Superb were the first to benefit from the Scout treatment, and now the Kodiaq SUV has been given the rugged makeover.

While the model’s two estate stablemates needed significant revisions to ensure they’re capable of tackling more than a muddy car park, the Kodiaq’s SUV status gives it a head start. Externally, the tweaks are more subtle than on other Scouts, and are limited to unique wheels, some extra badging and silver-painted skidplates front and rear. You’d be hard pushed to spot the Kodiaq Scout without looking at the badge, but at least it doesn’t spoil the car’s classy design.

Even so, off-road enthusiasts will be disappointed by the tiny increase in ground clearance (a mere 6mm has been added), and even though there’s extra underbody protection, it’s not particularly extensive. 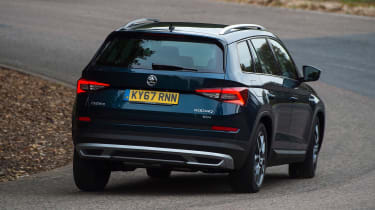 The Scout has more substance hidden away, though. Skoda is treating it more like a range flagship, throwing in kit such as the largest Columbus sat-nav and infotainment, WiFi, adaptive LED headlights and Alcantara seat trim.

Off-road mode, which sets up the powertrain for low-speed mud-plugging, is standard, too. Hill descent control and an electronic diff lock are also included. That’s useful kit, but it is all optional on a regular Kodiaq 4x4, which starts from nearly £6,000 less.

On the road, you’ll be pleased to hear the Kodiaq’s handling is largely unaffected. There’s no disguising the car’s bulk through corners, but it’s more controlled than with other similarly sized SUVs. The big wheels can allow sharp bumps to impact the cabin, although the ride is generally comfortable. 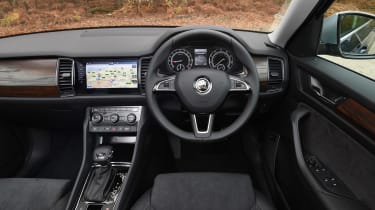 The flagship 187bhp diesel we drove has identical performance figures to the regular Kodiaq, and provides decent pace. Efficiency also impresses; again, it’s the same as that of the normal model.

Scout badges on the seats aside, there are few changes inside – but that’s not an issue, because even at this price the cabin is impressively solid and well designed. In fact, it feels remarkably luxurious. However, most buyers will be better off saving a big chunk of cash (or reducing their monthly payment) with an already well-specced SE-L.