The Skoda Kodiaq SUV is an impressive all-rounder and one of the best family cars on sale today. It lives up to high expectations and manages to cover all the bases by being comfortable, practical and good to drive, but also relatively affordable to buy and run, easy to live with and solidly built.

By offering a wide range of trim levels and an impressive entry price, plus a variety of punchy and smooth petrol and diesel engines, the Kodiaq should be on the shopping list of those after space and SUV style on a budget. But further up the range, it also appeals to those wanting premium levels of equipment and comfort. The option of front or four-wheel drive simply increases its appeal even further.

For Skoda, the Kodiaq was the right car at the right time. This large SUV mixes Skoda's ethos of practicality, simplicity and value for money with the current demand for big crossovers to great effect. In essence it's the SUV equivalent of the Skoda Superb family car, but with the added qualities of a raised driving position and the option of seven seats if you need them.

Despite the Kodiaq's relatively large dimensions, it's actually a surprisingly agile car that also delivers respectable economy for its size. That's because it uses a version of the VW Group's MQB platform, which focuses on weight saving in whichever guise it's used, and means the Kodiaq is lighter and more nimble than many of its rivals.

Skoda's focus on value for money is present at the entry point to the Kodiaq range, but top-spec models also offer good value, as they deliver upmarket quality for a reasonable price. Prices start from less than £26,000, with most of the best equipped versions still coming in under £40,000, unlike some rivals. 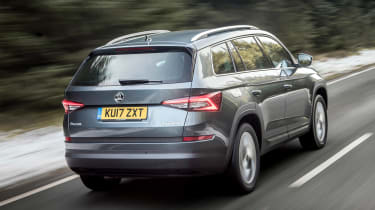 That range starts with the SE – available with five or seven seats – then moves through SE Drive, SE L, Edition, Scout and Sportline trims, with Laurin & Klement and vRS models topping the range off. All models except SE come with seven seats as standard.

In standard form the Kodiaq is front-wheel drive and features a six-speed manual gearbox, but you can add four-wheel drive and a DSG twin-clutch auto, or both, to most models. At the top of the range, 4x4 is standard on Scout, Sportline, L&K and vRS models. 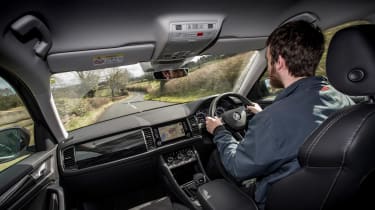 In some ways, the Skoda Kodiaq is a unique proposition in the family SUV class, as nothing matches its balance of performance, economy, practicality and upmarket appeal. The closest rival is the VW Tiguan Allspace, but that's more expensive, while the Nissan X-Trail and Peugeot 5008 don't have quite as much space as the Kodiaq. Elsewhere, the Hyundai Santa Fe and Kia Sorento offer seven seats, but are bigger and heavier, so not as economical or nice to drive, while the Land Rover Discovery Sport has a hefty price premium over the Kodiaq, but arguably isn't as versatile as the Skoda.

For an alternative review of the latest Skoda Kodiaq SUV visit our sister site carbuyer.co.uk