The Kodiaq has an engine to suit every need, while it handles well for an SUV and the ride is controlled. One of the best in the class

Buyers of large SUVs like the Kodiaq are unlikely to be too interested in how it handles bends at speed, but it's reassuring to know the big Skoda offers a very good ride and handling balance, on the whole. Combine that with the strong performance and decent refinement of the engines, and it’s the class benchmark overall.

Underneath the Kodiaq’s solid-looking exterior is the VW Group’s versatile MQB platform. This chassis architecture underpins everything from the Audi TT sports car to this family SUV, highlighting just how scalable it is. The Skoda gets a standard suspension layout for its class, with MacPherson struts taking care of damping at the front and a multi-link axle at the rear.

It’s easy to tell the Skoda’s underpinnings, because like most MQB-based cars, the steering is precise, albeit a little light and numb. However, with the raised body due to the taller ride height and longer-travel suspension, this set-up means it isolates you from the road nicely.

On standard 18-inch wheels, with relatively tall tyres, the ride is supple. The Kodiaq’s suspension tunes out unwanted wheel movements nicely, while keeping the body relatively stable. There’s still an underlying edge to the ride over washboard surfaces, but this calms down once the car is loaded with people and luggage. There’s a level of refinement to match the ride quality, too. While the 2.0 TDI engine is a little more vocal than some, it’s still not overly intrusive and you can use the revs before it becomes too noisy.

There's one proviso with the Kodiaq's ride. We’ve tried cars with the optional Dynamic Chassis Control, and without it fitted the SUV isn’t quite as adept at handling bumps. It’s still well controlled and less fidgety than a Nissan X-Trail, but sharp bumps can occasionally intrude and it feels a little firm in town. With Dynamic Chassis Control fitted, ‘Normal’ mode is an excellent compromise between agility and comfort, with Comfort mode making it too floaty and Sport mode making it unsettled over rough roads. 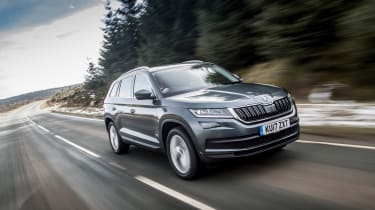 Due to the weight of the car and the extra ride height over the Superb, the Kodiaq isn’t quite as adept at filtering out road imperfections, but it’s nowhere near as knobbly as a Land Rover Discovery Sport. The Skoda still scores on comfort, while the rear end’s set-up is nicely balanced with the front, giving a cohesive, connected feel to the way the car drives. Bear in mind that racy Sportline cars are lower, firmer and stiffer, however.

All Kodiaqs get light, sharp steering, and if you firm things up in Sport mode there’s more precision than you might expect. Yet, even in Comfort the Skoda handles sweetly and rides with composure, so we’d generally leave it in this setting.

The Kodiaq Scout has a barely noticeable 6mm of extra ground clearance, and feels largely identical to the regular model to drive. It'll be the one to buy for keen green laners thanks to the suite of off-road hardware added, though everything except the extra ground clearance can be specified on lesser Kodiaqs.

When you do want to pick up the pace in the Kodiaq, it remains composed, and while the steering doesn’t have a lot of feel, it is precise because there’s a good level of grip on offer. Visibility is noticeably better than in some rivals, and even on 19-inch wheels the Kodiaq rides well, soaking up rough road surfaces and big potholes. At low speed it is a little unsettled, but less so than some rivals.

As the Skoda’s engine produces its torque low in the rev range, the DSG auto version doesn’t have to hold on to gears for as long as some conventional auto rivals, which helps with refinement – driving at a relaxed pace, the rattly diesel is firmly in the background and makes itself known only when you put your foot down.

The entry-level petrol is a 1.5-litre TSI with 148bhp; it’s reasonably punchy and pulls well for its size. We’d expect it to feel less zesty, yet it's just about adequate with five kids and a load of luggage on board. Its real selling point is refinement, as at idle you’d barely know it was on – and it only gets raucous above 4,500rpm. It’ll be a great choice for town dwellers or those doing low miles. 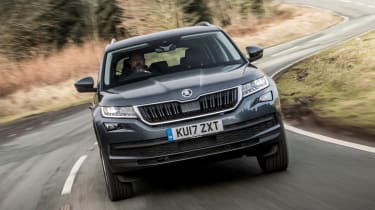 The vast majority of Kodiaq buyers are expected to plump for a diesel, though, and we’d recommend doing the same. The 148bhp 2.0 litre offers plenty of performance for most needs, and a gutsy 340Nm of torque means it’ll handle being heavily laden with a family, or towing, better than the petrol.

However, you have to rev the 2.0 TDI a little harder than some diesels. When we tested a five-seat Kodiaq 2.0 TDI 150 against a Mazda CX-5, it was two tenths slower than the Mazda from 0-60mph, with a time of 9.3 seconds. And, even with shorter gearing, it couldn’t match the CX-5 through the ratios. Still, in most of our acceleration tests it was only four tenths behind, which you’d struggle to notice on the road.

The engine offers more than adequate performance, while the chassis and gearshift strike a nice balance between involvement, comfort and refinement. For SUV buyers, the latter two are more important than outright speed or handling. But 4x4 traction will be reassuring in winter.

The 187bhp diesel is even swifter as it doesn’t need to be revved as much, but it costs more to buy as its only available on mid to high-spec models with a DSG gearbox. When we tested this engine, it was fast, with a 0-60mph time of 8.3 seconds – much quicker than the 9.5 seconds it took the Renault Koleos on the same test.

Measuring in-gear acceleration figures against the Koleos is tricky because of that car's CVT gearbox, but the 30-70mph figure in the Kodiaq was also faster – it took eight seconds flat, where the Renault did it in 9.5 seconds. The DSG dual-clutch gearbox is a great automatic, because the transmission shifts quickly and smoothly whether you’re taking things easy or driving harder.

For those chasing a little more performance, Skoda also offers a vRS model with a 2.0-litre bi-turbo four-cylinder diesel, producing 237bhp and 500Nm of torque. Power is sent through a seven-speed DSG to all four wheels, allowing a 0-62mph time of seven seconds flat and a top speed of 136mph. The vRS feels fast thanks to plenty of mid-range torque and a clever Dynamic Sound Boost system that makes the diesel powerplant sound like a sporty petrol unit, but outright handling on tighter roads is nothing to write home about.