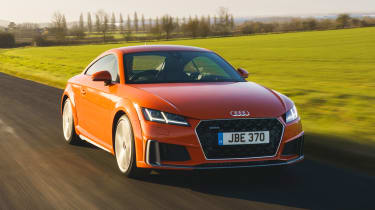 The third-generation Audi TT continues to deliver head-turning style, but the latest car is also more enjoyable to drive than ever. This is largely thanks to a weight-loss program that's been made possible by the car's construction around the modular MQB platform that underpins a wide range of VW Group products.

The TT's dynamic appeal is now underpinned by a streamlined offering of four petrol engines and new styling upgrades, so despite there no longer being a diesel in the range, the TT remains as relevant and competitive as ever.

The interior in particular sets new standards, from the technical wizardry of the Audi Virtual Cockpit to the overall design, fit and finish.

Add the established performance and safety benefits of the optional quattro four-wheel-drive system, and it's no wonder the Audi TT was Coupe of the Year at the Auto Express New Car Awards for two years running.

The Audi TT has been on sale in the UK for over 20 years, and in that time it has established itself at the cutting edge of design and tech for the German company. With the arrival of the R8 supercar, the TT has turned into a pint-sized supercar in comparison, but with similarly athletic looks, engaging handling and technology, it fits this brief very well.

The third generation Audi TT arrived in 2014 and was given an update in 2018 with the latest tech from other Audi models. As it has been on sale for a while, there are rivals that have come and gone. Cars like the Peugeot RCZ and Volkswagen Scirocco have fallen by the wayside, and the only other direct opponent is the BMW 2 Series, although of course that model line-up consists mostly of rear-wheel drive versions, compared to the TT's front or quattro four-wheel drive.

As there are a broad range of TT variants, including 2+2 Coupe and two-seat Roadster models, there are more rivals than this. Buyers could consider the Toyota GT86/Subaru BRZ duo or the Mazda MX-5 at the entry point to the range, or there's the ageing Nissan 370Z. At the top of the range, the TT does battle with cars such as the Porsche 718 Cayman and Boxster, the Lotus Evora and even the Ford Mustang is a similar price. 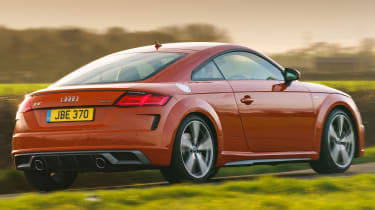 At its core, there are four TT versions to choose from: Sport, S line, Black Edition and Vorsprung, with all available in Coupe and open-top Roadster body styles.

The four standard trims are available with two engines that were introduced when the range was updated in 2018. These feature Audi's latest naming structure, and comprise 40 and 45 TFSI petrol units. Both units are based on the ubiquitous 2.0-litre turbo four-cylinder motor, with the 40 TFSI rated at 194bhp and the 45 TFSI coming with 242bhp. Audi's seven-speed S tronic auto and front-wheel drive are standard on the 40 TFSI, while the 45 TFSI can be had with a six-speed manual or seven-speed S tronic. The latter auto option can also be upgraded with quattro four-wheel drive.

The TTS has quattro all-wheel drive and adaptive dampers as standard. Using a 302bhp version of the 2.0 TFSI engine, it comes with the six-speed S tronic box.

The standard range offers decent value, with prices starting from approximately £32,000. The TT Roadster is around £1,750 more than the Coupe, while moving up from 40 TFSI to 45 TFSI costs £3,000 extra. Moving from Sport to S line adds just over £2,000 to the price, while Black Edition cars are around £1,600 extra on top of that. Those wanting the style and luxury afforded by the Vorsprung trim will have to dig deep, as this commands a £6,000 premium over the Black Edition variants.

For an alternative review of the latest Audi TT Coupe visit our sister site carbuyer.co.uk

Show me:
Audi TT set to morph into all-electric crossover 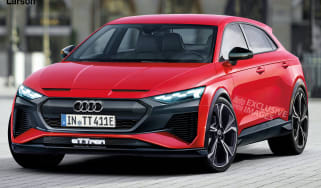 Poor selling Audi TT prepares to transform into a new all-electric SUV. Our exclusive images preview how it could look
Audi TTS vs Alpine A110 vs Porsche 718 Cayman 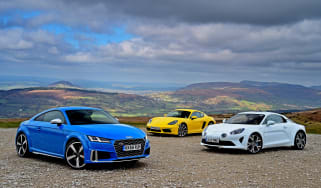 The iconic Audi TT has been facelifted to keep it competitive. We test the flagship TTS against the Alpine A110 and Porsche 718 Cayman
New Audi TT RS Coupe and Roadster facelift released 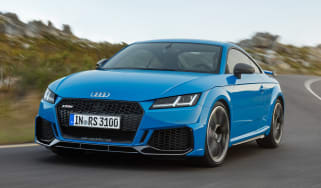 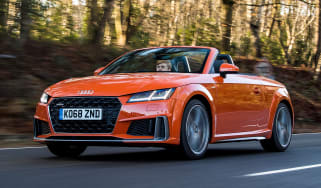 We've already driven the new facelifted Audi TT Coupe in the UK, but now we get behind the wheel of the drop-top Roadster
New Audi TT Coupe 2019 review 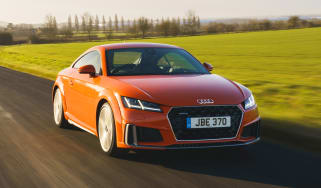 Will a mild facelift do anything to dent the ever popular Audi TT's stylish appeal?
150 Audi TT ‘20 Years’ editions due on sale in 2019 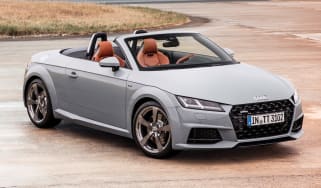 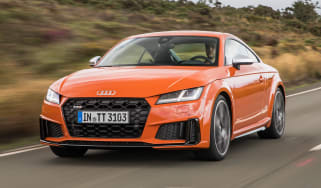 The Audi TT S is fast, refined and beautifully built, but can it match the Porsche 718 Cayman or BMW M240i?
New 2019 Audi TT: facelifted Coupe and Roadster revealed 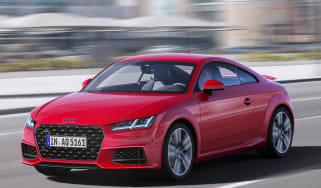 The evergreen Audi TT has been given a mid-life facelift, with extra power and equipment, plus a new special edition
Audi TT RS review 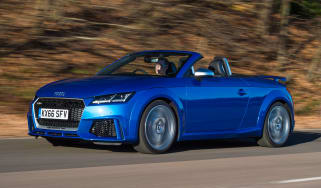 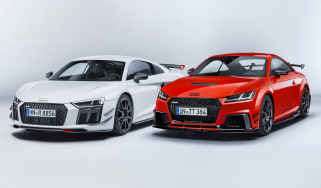 Range of add-ons for Audi sports cars add appeal, but may not make it to the UK
New Audi TT RS coupe 2016 review 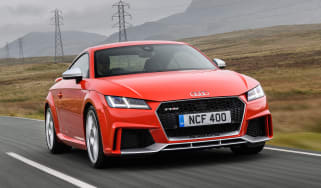 Watch out Audi R8, the most powerful Audi TT RS ever made is hot on your tail…
Advertisement
Audi TT TDI diesel gains quattro all-wheel-drive 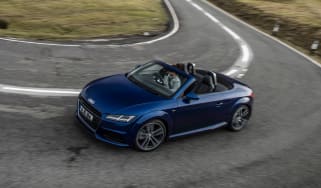 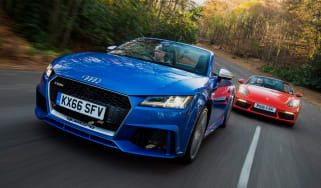 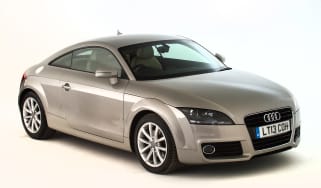 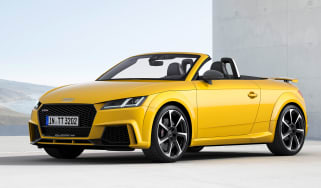 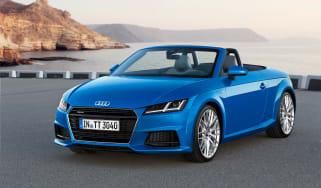 Those after a handsome and fun-to-drive convertible should certainly consider the new Audi TT Roadster
Coupe of the Year 2016: Audi TT

The Audi TT is the 2016 Auto Express Coupe of the Year, with the Ford Mustang and Porsche 911 commended
Porsche 718 Boxster vs Audi TTS Roadster 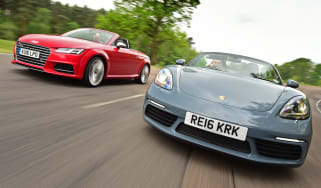 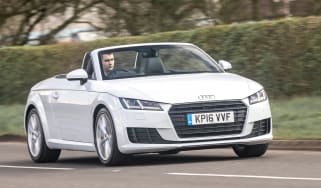 This new TT 180 is the entry point into the Roadster range, and costs £3,185 less than the 2.0-litre petrol
Long-term test review: Audi TT 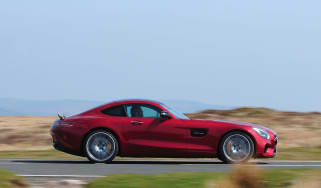 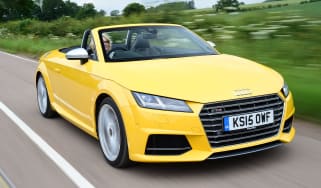 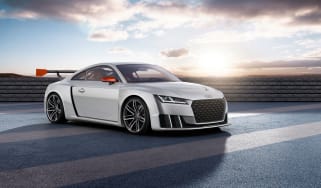 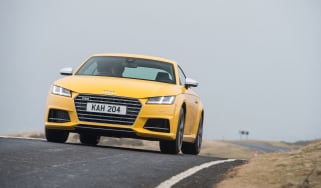