Watch out Audi R8, the most powerful Audi TT RS ever made is hot on your tail… 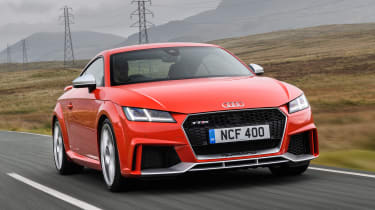 It would be no exaggeration to think of the new TT RS as a baby R8 supercar rather than a pumped-up TT. The noise, speed and savage performance of the RS lends itself to something far more exotic and expensive. It may not have the poise and handling balance of a Porsche Cayman, but it’s faster, better looking and sounds infinitely better - factors that will matter more to many buyers.

Blowing fifty grand on a sports car is something most of us will never do more than daydream about, but if you’re thinking of doing just that you’re almost spoiled for choice.

The latest Audi TT RS lines up alongside a thrilling group of potential rivals that includes the Alfa Romeo 4C, the BMW M2 and the Porsche 718 Cayman, and it’s got to knock the ball out of the park to beat any of that lot.

Audi offered the previous TT RS for sale with up to 350bhp in RS Plus guise, but the latest version pumps out a monster 395bhp backed up with 480Nm of torque. Unsurprisingly then, there’s never been a faster TT production variant. Thanks to a new five-cylinder 2.5-litre turbocharged motor directing its power to the ground via a rapid-fire dual clutch gearbox and Audi’s quattro 4x4 system, the new model cracks 0-62mph in 3.7 seconds – some Audi R8 supercars only manage 3.6 seconds.

The effect of all that power, and the RS tweaked TT’s chassis, is spell-binding. The bulk of the power is delivered from 1,700rpm and the RS lashes through its gears with the thrilling accompaniment of its unique five-cylinder soundtrack. 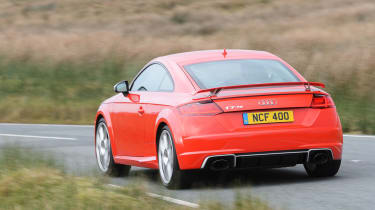 The S Tronic dual clutch gearbox has seven speeds, and when you’re relaxing in superbly appointed TT RS interior it slurs the changes almost imperceptibly. Put the car into Dynamic mode, and rifle-bolt changes up through the box are met with a vicious bang from the exhaust, which delivers a delicious crackle on the downshifts. In comparison the Porsche Cayman’s four-cylinder motor sounds like a kitchen gadget.

You can spend a grand on a sports exhaust for the TT RS, but the standard item has such a strong aural presence that we struggled to tell them apart. So our advice is to spend the money on an LED Matrix headlamp upgrade instead.

It’s all too easy to get caught up in the TT RS lunacy, and to forget that a great sports car has to have more in its repertoire than noise and speed. Demolishing slippery b-roads is where the Audi’s skill lies. The quattro all-wheel drive system serves up relentless grip, allowing you to exploit the full potential of the five-cylinder engine.

Still, with that motor located on top of the front axle, the TT RS is naturally nose heavy. Dive into a corner with too much speed and you can feel the front end begin to push wide, and despite Audi claiming 100 per cent of the power can be sent to either axle, it’s almost impossible to neutralize the car using the brakes or by lifting off the throttle mid-corner. Over the same section of road, you’ll have more fun in a 718 Cayman, but you may well be faster in the TT RS. 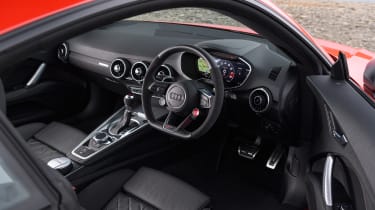 Something you have to give Audi credit for is the ride quality – not something you could have claimed about an RS model a few years ago. The suspension is stiffly sprung and 10mm lower than the standard car, so it can feel quite firm over rougher ground, but excellent damping helps to iron out any lumpy road surfaces. Magnetic ride suspension is also available as an option, and it adds an extra layer of comfort, so if you’re going to be using the TT RS on a regular basis, it’ll be worth your while.

As ever, the interior of the TT is the usual Audi cocktail of sophistication and luxury. Cool alumiunium, stitched leather and a beautiful Alcantara steering wheel give it that premium feel, while the 12.3-inch virtual cockpit and intuitive infotainment system set it apart form the crowd.