We've already driven the new facelifted Audi TT Coupe in the UK, but now we get behind the wheel of the drop-top Roadster 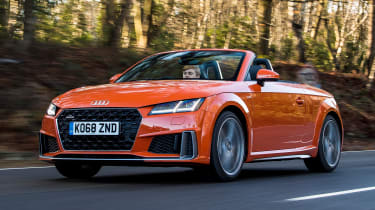 The TT Roadster could well be the pick of Audi’s facelifted sports car range. It can’t compete with a Porsche 718 Boxster for driving thrills, but as such, makes much more sense as a relaxed roadster. Even though you sacrifice some refinement, it remains a devastating point-to-point weapon – especially in cold, damp and wet weather.

The launch of the facelifted Audi TT has been a long and drawn-out affair. We first drove the revised TT S in July last year, before the standard car arrived in the UK last month. Now, though, we’ve been thrown the keys to the revised TT Roadster in punchy 45 TFSI guise.

It has the same 2.0-litre engine and seven-speed box as the Coupe we tried in January, as well as a selection of very similar styling tweaks. Headlining these is a new single-frame radiator grille, which is flanked by redesigned air vents. Yet even when they’re parked side by side, you’d be hard-pushed to separate old from new.

Inside, S line cars now get a set of sculpted Super Sports seats, which are heated on all models. The excellent Virtual Cockpit dials, which first appeared on the old car, remain. 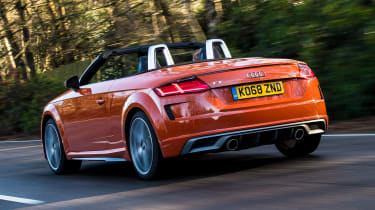 But of course, the biggest difference between the car you see here and the two updated models we’ve driven already is the foldable fabric roof. It’s unchanged from the outgoing model, and can be dropped in 10 seconds without compromising boot space.

Leave it up and the TT is a relatively refined cruiser. The fact you’re driving the Roadster instead of the fixed-roof Coupe is most obvious around town, where passing voices and idling engines are apparent from around the rear three-quarter. Audi may boast about its ‘acoustic’ qualities, but it can’t match the metal-topped TT when it comes to eliminating the noise of the outside world for its occupants.

Yet that’s not what this car is about. With the roof stowed away, the revised TT Roadster still turns heads. It’s a carefully-crafted, curvy shape that strikes a sharp figure when viewed in profile; even at this time of year, it encourages you to lower the lid at every opportunity.

With the windows raised, both driver and passenger are protected from the very worst buffeting, with the excellent neck-level heating keeping you warm even when the temperature drops into single figures. As before, the climate controls and heater functions are hidden in the air vents.

Like the Coupe, the Roadster isn’t the most dynamic option in this class. Keen drivers will still be better served by the Porsche 718 Boxster, while the lure of a meaty six-cylinder engine in the latest BMW Z4 M40i is hard to ignore.

And yet, point to point, either rival would do well to keep up with the Audi. In 45 TFSI spec, the TT has loads of grunt – and the dual-clutch gearbox switches cogs without any hesitation. 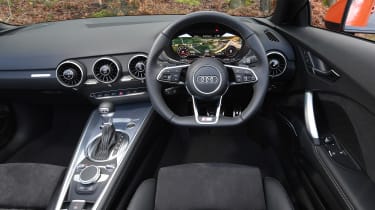 It’s not the most exciting four-cylinder engine on sale, but you can’t fault its effectiveness. The quattro all-wheel-drive system fitted to our car inspires confidence as well, even on cold and slippery roads.

It doesn’t feel dramatically less controlled than the inevitably stiffer Coupe, but nor does it roll through bends. Take things gently and the TT shines, with a sense of occasion by the bucket load; even four years after it was launched, the Audi Roadster continues to feel like a truly luxury product.

Prices for the drop-top TT start from just under £34,000, and for that you get a Sport-spec 40 TFSI with the new 197bhp 2.0-litre engine. Standard kit includes 18-inch wheels, xenon lights (LEDs are an option) and Alcantara sports seats. Audi’s MMI sat-nav system is included, too.