The Audi TT S is fast, refined and beautifully built, but can it match the Porsche 718 Cayman or BMW M240i? 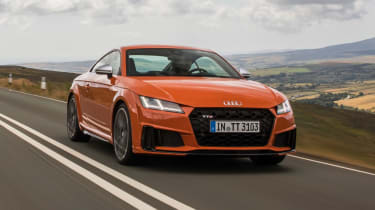 The Audi TT S is a fast, refined and beautifully built premium coupe – albeit one that ultimately lacks any kind of character. It’s not as exciting as a Porsche 718 Cayman or rewarding as a BMW M240i, instead sitting as a more style-focused and composed sports coupe. The TT S is hard to fault, but hard to recommend at this price; for that reason you may be better off with the cheaper 194bhp entry-level model.

Near enough 20 years ago to the day, Audi launched the original TT at the Frankfurt Motor Show. The firm refers to it as an emblem of 20th century automotive design; it was an icon of its time, and still turns heads today.

Over the past two decades Audi has built more than 600,000 TTs. It still has a huge following in the UK and around the world – so four years after the third-generation car hit showrooms, Audi has given it a mid-life refresh.

The changes are predictably light. Save some new Matrix LED headlights, tweaked bumpers and OLED rear lamps on top-spec cars, the new TT is visually identical to the old one. Unless you opt for one of the three new colours, that is. 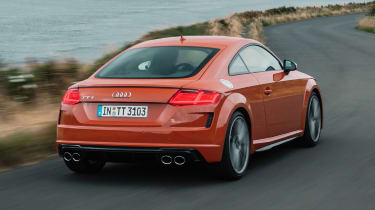 Inside, the updates are even harder to spot. There are new inlay options and a set of Super Sports seats on S line cars, but that’s about it. A new ‘TT 20 Years’ special edition has been launched, however, which adds Moccasin Brown leather trim. UK prices and specs will be announced when the range goes on sale in the autumn.

Elsewhere, the rapid decline of diesel in the coupe segment means there’s no longer the option of a TT TDI. The range now comprises a pair of TFSI petrols and the flagship (for now) TT S quattro. A five-cylinder 400bhp+ TT RS will arrive next year.

Our first drive opportunity came courtesy of the TT S – although with ‘just’ 302bhp, it’s not as potent as it was before. This is due to a new emissions-limiting petrol particulate filter. Torque is up 20Nm (now 400Nm), however, which helps cut the car’s 0-62mph by one tenth of a second.

But the way the TT S delivers its shove is quite typical of a fast Audi. While it’s undeniably quick, it never feels that urgent. Power is sent to the tarmac via the firm’s venerable quattro all-wheel drive system – delivering extraordinary grip on all surfaces and in all conditions.

It can’t match the outgoing TT RS for aural excitement, and it lacks the drama of a BMW M240i. A Porsche 718 Cayman is more rewarding, too, but despite the dip in power, the TT’s four-cylinder turbocharged engine and dual-clutch auto box are as effective as ever; this German coupe is an incredibly easy car to drive quickly.

While there isn’t much feel through the light steering, turn-in is sharp. It’s an amazingly agile car, in fact, and felt more than at home over the complex elevation, tight hairpins and sweeping bends of the Isle of Man TT course. This is helped by the exemplary body control, but the ride is firm – especially on our car’s 20-inch wheels. 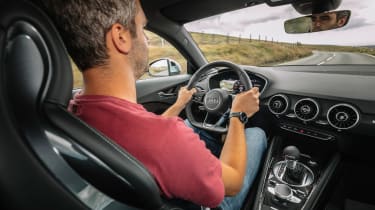 Of course, alongside all this composure, you still get a carefully crafted and beautifully trimmed cabin. While the Virtual Cockpit set-up may not be to all tastes, it’s intuitive enough to use from the driver’s seat. Just don’t ask your passenger to change the radio station or sat-nav destination.

Those digital dials are now available with a new Sport display option. It’s standard on the TT S but an optional extra on TFSI cars – allowing the driver to prioritise core information such as power, torque and G-force. The centralised rev counter set-up is usually reserved for RS models, but works well here, too.

Anyone concerned with practicality shouldn’t immediately write off the TT, though. Adults will be understandably uncomfortable in the back, but there’s a decent boot with a tall hatchback opening. There are a couple of cubbies in the cabin and small door bins, too.