A step below the mind-blowing M2, BMW's M240i Coupe is an accomplished all-round sports car with a sweet 6-cylinder engine 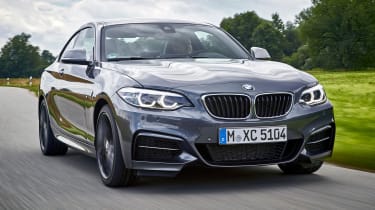 The updated M240i is an accomplished sports coupe with bags of character. The subtle updates freshen the design and the 5 Series-inspired tech pulls it in line with other models in the range. But while many manufacturers are switching to downsized turbos, the BMW’s relatively large 3.0-litre straight-six retains a sense of occasion missing in some rivals – and feels all the better for it.

In a world where even Porsche is fitting its smallest coupes and convertibles with downsized turbo engines, the BMW M240i stands proud as one of the only models still available with a sonorous six-cylinder motor.

Granted, it still uses turbocharging to boost performance and reduce emissions, but its comparatively large 3.0-litre engine is unique in this class. Like the diesel 2 Series Convertible we drove recently, the flagship two-door has been given a mid-life facelift – adding a subtle new look and fresh in-car tech.

The car given to us on the international launch was fitted with xDrive all-wheel drive, though UK cars will continue to be rear-drive only. All cars get a six-speed manual gearbox as standard, but our Coupe had the more desirable £1,300 ZF eight-speed auto. 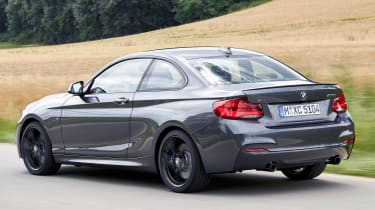 Like the cabrio, the updates are mainly visual and tech-focused, with a few subtle exterior tweaks and some quality improvements inside. All cars get broader air intakes, a more prominent grille and LED lights as standard, as well as extra cabin detailing and new digital dials. A full range of BMW ConnectedDrive features have also been added, including a WiFi hotspot, real-time traffic info and app connectivity. Wireless Apple CarPlay is a £235 option.

The lack of changes under the skin means the revised M240i is just as economical as before. The automatic car is fractionally more frugal than the manual and should return 39.8mpg – comparing favourably with less powerful rivals. A four-cylinder PDK-equipped Porsche 718 Cayman only manages 40.9mpg, while CO2 emissions of 158g/km (vs the BMW’s 163g/km) mean the two cars are separated by a single Benefit in Kind tax band.

The M240i gets the same 335bhp straight-six as its predecessor, which makes it a keen and lively performer on the road. Manual cars sprint from 0-62mph in just 4.8 seconds, while the auto shaves another two tenths thanks to its lightning-fast shifts. Not-for-UK xDrive versions are faster still, covering the benchmark dash in a Porsche 911-baiting 4.4 seconds.

The steering is well weighted and offers plenty of feedback, while body control is excellent. Our car had BMW’s Adaptive M Sport suspension, which allowed us to firm up the damping for virtually roll-free cornerning. There’s a chance this setting might prove too bumpy for British buyers, though the ability to select a sportier engine map with the softer ride will be a boon on UK roads.

However, despite all its performance, the M240i is suitably refined on longer journeys. Floor the throttle and the straight-six revs cleanly with a throaty growl, but take things easy and it’s as quiet as any 2 Series. In fact, due to its fixed roof and quieter petrol engine, it’s more hushed than the 220d Convertible we tried previously. 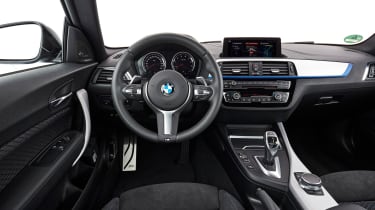 The low-slung driving position is complemented by the supportive and comfortable sports seats, while BMW has improved its slick iDrive infotainment system by adding touchscreen functionality. The classy digital dials look great, too, though can’t compete with Audi’s Virtual Cockpit display.

Not only is it faster than a Porsche Cayman, it’s more practical, too. The 390-litre boot is (on paper) smaller, though in reality the space is much more usable day-to-day. There’s space in the back for two adults at a push, and when not in use, the rear bench can be used as additional storage.

All the updates to the M240i are also available in Convertible form, commanding a premium of £3,200 across the board.