The entry-level Porsche 718 Cayman is now the cheapest Porsche you can buy, but it doesn't disappoint 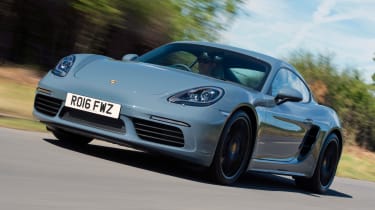 The new Porsche Cayman is faster, cheaper to run, and even better to drive than its predecessor. Yes, it lacks the aural drama of the old flat six, but to all intents and purposes – especially as a driver’s car – this new 718 has improved in almost every area. A pre-facelift GTS is still more thrilling, but nine times out of 10, this standard model will tick all the right boxes.

Downsizing is all the rage at the moment. In an effort to boost performance but reduce pollutants, manufacturers are employing smaller, turbocharged engines to meet ever-stringent global emissions legislation.

Nowhere is this more obvious than at Porsche; the new Panamera is now turbo-only, the naturally-aspirated 911 is nearly extinct, and a six-cylinder Boxster is a thing of the past.

Not content with an engine overhaul, Porsche has also repositioned its 718 Boxster and Cayman models by switching the two in the range meaning the coupe is the new entry point to Porsche ownership. This now fits with rival manufacturers like Jaguar and BMW, who for years have charged a premium for the more complex – and to some, more desirable – drop tops. 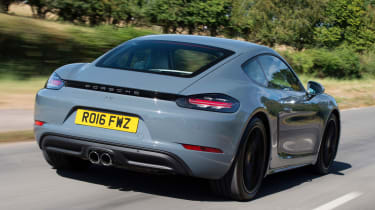 So, with this entry level non S Cayman out goes the six-cylinder engine, and in comes a turbocharged 296bhp 2.0-litre four-cylinder engine. Despite the reduced cubic capacity, there’s 25bhp more than before, with torque also boosted from 290Nm to 380Nm – making a big difference in mid-range punch.

Provided you maintain revs above 2,500rpm, the downsized engine feels just as strong as its predecessor. Keep the turbo spooled and it’ll pull strongly all the way to the red line, making it an alarmingly effective overtaking tool – and easily as competent as the old six-cylinder in a straight line.

In fact, the 0-62mph sprint is now taken care of in 5.1 seconds ­– six tenths faster than before. Select the brilliant (£1,922) PDK dual-clutch auto and this falls to 4.9 seconds. That’s not only faster than the outgoing car, but quicker than an old Cayman GTS. Top speed for our manual test car creeps up from 165mph to 171mph, too. 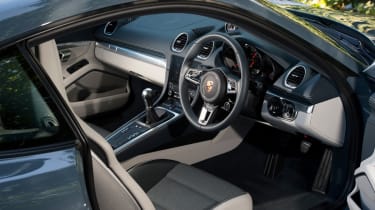 It seems crazy to compare the new Cayman to today’s hot hatchbacks, but on paper they’re alarmingly well matched. A Honda Civic Type R, for example, packs 306bhp (10bhp more than the Cayman) and can hit nearly 170mph flat out. Smaller capacity engines and turbocharging have been extremely well received in this area of the market, so why shouldn’t a company such as Porsche employ the same tactics?

Fuel economy improves, too, with the new entry-level Cayman capable of 38.2mpg – almost 5mpg better than in the pre-turbo era. During our 150-mile test route, we even saw the trip readout hit 39mpg on a steady motorway run. Emissions take a welcome drop from 195g/km to 168g/km, making the new 718 a more attractive proposition for private buyers and company car drivers alike.

But while making the Cayman more economical is a priority for Porsche, prospective owners are likely to place driving dynamics above any kind of fuel saving tech. Luckily, they won’t be disappointed.

The steering is pin-sharp with plenty of feel through the wheel. The mid-engine chassis is taught, while the rear-wheel drive layout slingshots you out of tighter bends while providing unflappable grip through the wide-section back tyres. Body roll – like before – is nearly non-existent, with the two-seat coupe remaining almost completely flat through longer sweeping bends.

But amazingly, the 718 Cayman also throws an exceptional ride into the mix. With the optional £971 adaptive dampers in their standard setting, our test car never fidgeted, crashed or shook over broken surfaces or deeper potholes. It was surprisingly composed actually, while the supportive seats ensure long-distance comfort is also unaffected. Switch things to Sport mode and things tighten up, but the standard setup struck a good compromise even during more spirited driving. 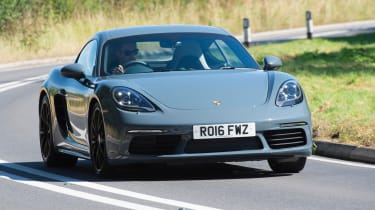 But while the ride was more than satisfactory, our test car’s 20-inch wheels did cause some disturbance at higher speeds. As this is our first drive of the new 2.0-litre Cayman, we’re yet to try a model on smaller rims – but given our experience on the lower-profile tyres, we’d recommend opting for a more modest setup. Yes, they look great – especially in conjunction with this 718’s Graphite Blue paint – but the road noise on some of Britain’s rougher routes was enough to leave us reaching for the earplugs.

The cabin – just like the revised 911 – is beautifully trimmed, with a perfect driving position and superbly shaped wheel. The centre-console is less cluttered, too, thanks to the simplified dash and addition of Apple CarPlay.

But now we must address the elephant in the room: the noise. Much has been said about what this turbo flat four lacks over its wailing predecessor, but it’d be unfair to suggest it dominates the driving experience. On a car as sweet as this, it’s hard to get hung up on the way it sounds. It’s a bassier growl than before, but far from unpleasant. 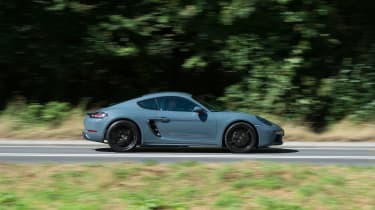 Our car came with the £1,530 sports exhaust system, but while it can transform a 911 from cruiser to hooligan, it makes less of an impact on the Cayman. Press the button and you’ll notice a slightly throatier note, but it’s refuses to change the fundamental character of the car. The engine note tends to get louder rather than increasing in pitch and ferocity as it did before.

What we must remember is that there is an entire generation of drivers to which turbocharging is the norm. The younger buyers – to whom this car is (and always was) primarily aimed at – have likely never experienced the thrill of a naturally aspirated V8, nor the linear torque of a howling V10.

To them, a turbocharged four-cylinder offers more horsepower, more torque and more performance than the old engines, but with vastly improved fuel economy and emissions. And do you know what? In our eyes there’s nothing wrong with that.