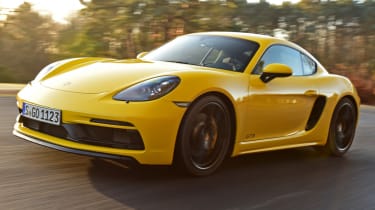 Ignore the doubts and despair surrounding Porsche’s latest four-cylinder engines – the 718 Cayman GTS is one of the finest sports cars on sale. Even without the old car’s naturally-aspirated flat-six, the latest GTS is a sweet, sharp and ultimately entertaining car to drive, yet one that manages to feel perfectly judged for the UK’s rutted roads.

The fact that every new Porsche Cayman now comes with a four-cylinder engine isn’t particularly newsworthy. While enthusiasts may mourn the demise of the firm’s naturally-aspirated flat-six, it looks like the downsized turbo units are here to stay.

That’s even true of the current 718 Cayman GTS flagship, which joins the range in 2018 with an uprated version of the standard car’s boosted flat-four. It gets an extra 15bhp over the Cayman S, and commands a premium of just over £8,000. For that, you get Porsche’s Sport Chrono Package, adaptive (PASM) dampers and a limited-slip differential.

To see if the GTS is still the Cayman of choice, we’ve been given the opportunity to try an early left-hand drive test car on UK roads. Fitted with the standard six-speed manual gearbox, it’s a rather different proposition to the PDK-equipped 718 Boxster we drove in Spain last month. 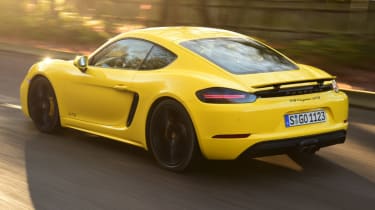 While the auto might make the Porsche easier to use every day, the manual turns it into a pure, unadulterated sports car. The gearshift is precise and mechanical in its action, and with sport mode engaged the engine will rev-match for smoother changes.

The manual GTS is no faster than the equivalent S from 0-62mph (4.6 seconds), but it feels eager in every gear, pulling strongly right round to its near-8,000rpm redline. The noise it makes might not be as pleasing as the old six-cylinder, but it’s not totally devoid of character – burbling and idle and growling purposefully as you gain speed. Lift off, and the standard-fit sports exhaust will greet you with fiery pops and crackles on the overrun.

While few will notice the Cayman’s stiffer body in normal driving, the thing that surprises most is how comfortable the car is. Despite its driver-focused chassis setup, the GTS deals with rutted roads and pitted surfaces with aplomb, even in its firmer suspension settings.

Matched to the same sweet and feelsome steering, the Cayman GTS is even more rewarding than its drop-top Boxster sibling. The mid-engine setup and perfect weight distribution means the baby Porsche is as sharp as anything in this price bracket – and arguably more agile than many models costing twice the price. 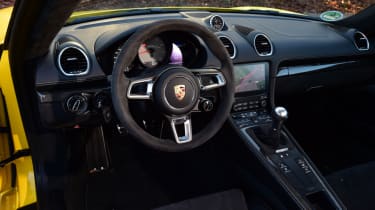 The standard-fit 20-inch wheels do result in quite a bit of road noise, but our car’s comfortable and beautifully trimmed sports bucket seats (£2,315) make it a surprisingly fine long-distance cruiser. Practicality isn’t bad, either, with a deep boot in the nose and a shallower space behind the engine. Its compact dimensions make it more wieldy on tight UK roads, too.

Of course, like any Porsche product, the cabin is beautifully appointed, with Alcantara covering the steering wheel, gear lever and armrests. The perfectly placed infotainment screen is slick to operate, and comes fitted with sat-nav and Apple CarPlay as standard. The big central rev counter is easy to read, while the digital pod to the right can show everything from trip information to G-force.