The Porsche Boxster is one of our favourite sports cars, thanks to its incredible handling and real-world useability 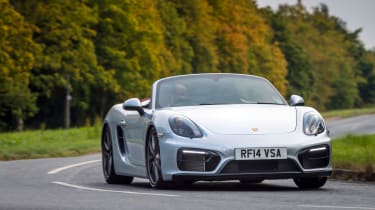 Could the Porsche Boxster be the ultimate open-top sports car? It offers a mix of sharp handling, everyday usability, attractive price and reasonable running costs that rivals such as the BMW Z4 and Mercedes SLK can only dream of matching.

There are three Boxster models now available – the standard 2.7-litre car, the faster 3.4-litre Boxster S and the range-topping GTS which uses the same larger engine only tuned to get an extra 15bhp. It's lighter and faster than the Mk2, yet fuel economy is improved, too. In fact, the Boxster is so good that it almost makes the more expensive Porsche 911 Cabriolet an irrelevance.

The Boxster Mk3 was revised in 2016 with the introduction of four-cylinder engines in the 718 Boxster range.

The Porsche Boxster is all about the driving experience. The two seater has been designed from the outset to entertain, and the sharp steering, responsive chassis and powerful engines combine to deliver one of the best performing sports cars you can buy. The 261bhp 2.7-litre flat-six delivers strong performance, while the larger 311bhp 3.4-litre engine in the Boxster S is a match for the larger 911 for performance.

In the GTS model you have an extra 15bhp taking the total power output to 326bhp – making it the most potent Boxster yet capable of 0-62mph in just 4.7 seconds when fitted with the PDK automatic gearbox – that makes it faster accelerating than an 911 Carrera. Opt for the manual 'box and 0-62mph takes 5 seconds flat. 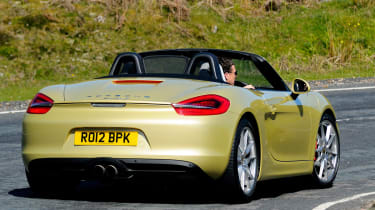 Speaking of which, all models get a slick and precise six-speed manual as standard, while Porsche's rapid-fire seven-speed PDK twin cutch transmission is available as an option. The Boxster can be a little on the firm side when you’re taking it easy – especially with 20-inch wheels – although the optional PASM adaptive dampers improve the low-speed ride.

Drivers wanting the ultimate in driving fun can opt for the optional Sport chassis upgrade that adds stiffer springs and dampers, plus a 20mm lower ride height. However, while it's even shaper to drive than the standard car, ride comfort does suffer but only marginally.

The range of flat-six engines give the Porsche Boxster excellent fuel economy, while a standard stop/start system further boosts efficiency. The standard 2.7-litre car promises to return 34.4mpg, while emissions of 192g/km are very respectable considering the performance on offer. Prices start at around £37,000, which is cheaper than top-spec versions of the BMW Z4 and Mercedes SLK.

You will pay a premium of around £8,000 for the S model with its bigger engine and marginal increase in kit while the GTS is a further £5,600 and adds popular options such as the active suspension as standard, 20-inch wheels, sports seats, sports exhaust and extra Alcantara and leather in the cabin.

Boxster residuals are strong, with all versions retaining nearly 60 percent of their value after three years motoring. However, it's worth noting that you don't get a huge amount of equipment as standard, apart from on the GTS, yet even then you'll still find it hard to avoid the expensive options list to spec up your perfect car.

The Porsche Boxster is following the lead of its bigger 911 brother, and the latest version’s looks are just an evolution of the last car.

Yet despite this cautious approach and compact dimensions the Boxster looks fantastic. There are hints of the Porsche Carrera GT supercar in its wide and purposeful stance, while the large air intakes behind the doors and integrated rear spoiler leave you in no doubt about its performance potential.

The entry level Boxster is identified by its oval centre exit exhaust and 18-inch alloys wheels, while the faster and more expensive S gets twin exit tailpipe and 19-inch rims. As you'd expect from a Porsche, the interior is beautifully built and well laid out. The new GTS variant is marked out by smoked front and rear lamp clusters, larger 20-inch alloy wheels and a noticeable 20mm drop in ride height.

Another surprisingly strong point with the Porsche Boxster is its practicality. There are usefully shaped boots in the nose and tail, which combine to deliver a respectable 280-litres of capacity - the more expensive Jaguar F-Type has a cramped 196-litre boot. There's also a number of handy cubby holes in the interior, including a lockable glovebox.

The rest of the interior is surprisingly spacious, with plenty of head and legroom for both the driver and passenger. Unlike the metal roofed Mercedes SLK and BMW Z4, the Porsche gets a traditional fabric hood. However, the powered covering can be raised or lowerd in a matter of seconds, while excellent insulation means it keeps the cabin quite and free of draughts when it is in place.

Porsche has a strong reputation for reliability and robust engineering, securing an impressive top ten finish in our 2012 Driver Power customer satisfaction survey. As a result, there's no reason to expect the Boxster won't be a durable and faithful choice.

However, it's worth bearing in mind that if it does go wrong, the Boxster will be very expensive to repair. The Porsche hasn’t been tested by Euro NCAP yet, but it comes with a host of electronic driver aids and a full complement of airbags, while pop-up roll hoops protect the occupants in the event of a roll.