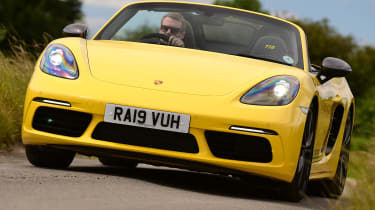 The Boxster T taps into the vein of ability that makes the 718 such a great sports car – its handling and involvement. Some will like the engine, some won’t, but importantly the chassis outshines it and takes a starring role. The standard spec makes the T cheaper than a 718 with similar options (some still can’t be specced) and it boasts brilliant dynamics, a great connection with the driver and a surprising level of usability. Don’t think of it as a track special, rather a car with the emphasis placed on the elements that really matter to drivers. It seems like less really is more for the 718 Boxster T.

Just as the previous generation Porsche 911 range gained a T (for Touring) model, harking back to its namesake from 1967 as a pure driver’s car with a more basic specification, now it’s the 718 Boxster’s turn to be ‘Teed’.

This means, according to Porsche, that the T is “pared back to the bare essentials,” so you get features like cloth door pulls instead of metal handles and the brand’s narrower, 360mm diameter GT Sport steering wheel, while the infotainment is replaced by a cubby hole in the dash. It’s a no-cost option to reinstate it like in our test car, which most buyers probably will.

There are many more key spec and engineering tweaks to back up the claim of it being developed for driving enjoyment though, as the 718 Boxster T also sits 20mm lower than the standard car on its Porsche Adaptive Suspension Management two-mode dampers (10mm lower than a standard Boxster with optional PASM), while it also features adaptive engine mounts, a mechanical limited-slip diff with torque vectoring and the Sport Chrono pack. 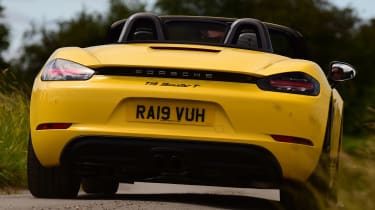 This adds Sport, Sport Plus and Individual driving modes alongside the default setting (it’ll also blip the throttle for you on downshifts in the former two modes, even in the manual) and a half-way house PSM Sport choice for the stability control so you can indulge in the Boxster’s beautiful balance with the reassurance of a (slightly looser) safety net.

The engine remains the same as the standard 718’s, so there’s 296bhp and 380Nm of torque from the 2.0-litre flat-four turbo. A seven-speed dual-clutch is available as an option, but given the T’s focus the six-speed manual just seems more fitting – it’s a brilliant gearbox, with a positive, precise and mechanical-feeling action and just the right weighting to the shorter-than-standard lever’s throw. It’s a joy to change gear.

It also adds an extra layer of engagement, which is welcome, as the usual 718 problem is still apparent here: the engine. It’s distinctive but isn’t the most sonorous or soulful unit, and while the box is great, the ratios still feel too long.

Or maybe it’s that although the motor actually revs beyond 7,000rpm, it takes a while to get there and never feels like it really kicks. It’s very linear and therefore very predictable, once you get through an initial period of lag lower down, but even with a sports exhaust it burbles, grumbles and drones it’s way to the rev limiter – when you get there you’ll be glad of the manual box to punctuate progress.

It’s not necessary to rev it all the way to the redline though, such is the T’s shove.

While straight-line performance is good, and with plenty of traction 0-62mph in 5.3 seconds is possible, the joy of the T is more about exploring the brilliant handling. 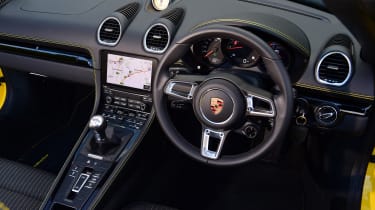 Every area of the chassis feels matched perfectly, which in turn means you feel so incredibly well connected to the car. The steering is a delightful weight and has an intuitive rate of response. You always know how much lock you need, or to add or take away to trim your line in a corner.

It’s possible to do so with the throttle as well, as the torque vectoring and limited-slip diff turn the car noticeably on the way out of second-gear bends.

The damping is superb and there’s as much grip and therefore stability as you’d ever need in a road car really. In Normal there’s compliance and even with the roof down chassis flex is rarely detectable – and only over badly scarred roads.

In Sport it’s clear the car feels tauter, but it’s not much and the composure doesn’t break down. The Boxster T just feels poised, more rigid in its vertical movement and a little more incisive, but not really too much less comfortable.

Given the focus on involvement it’s a surprisingly useable car, as refinement is good, although with big 20-inch alloys as standard you do get plenty of tyre noise. It doesn’t deviate from the Boxster blueprint in this respect, so with a total of 275 litres of luggage space split between the front and rear boot, and claimed efficiency of 32.5mpg and 187g/km it should be about as easy as to live with two-seater roadsters come.