Updated version of the Audi TT RS is on sale now, featuring a 395bhp five-cylinder engine and handful of styling tweaks 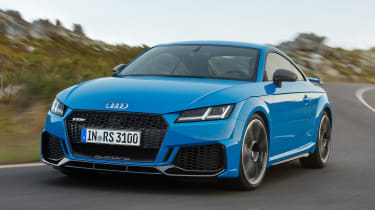 The new facelifted version of the Audi TT RS has been revealed, featuring a fresh new look and a 395bhp powerful five-cylinder engine. Orders begin this month with prices starting from around £60,000 for the Coupe and around £62,000 for the Roadster.

The updated model adopts a more masculine appearance than the standard car, with a deeper front bumper, a large front splitter, an RS honeycomb grille, wider side-skirts, a fixed rear wing and a redesigned rear bumper with a black RS diffuser and twin sports exhausts. Buyers can also choose between 19- or 20-inch alloy wheels.

The TT RS is powered by the same 2.5-litre turbocharged five-cylinder petrol engine as the old model, with 395bhp and 480Nm of torque. Power is fed through a seven-speed DSG automatic gearbox to an all-wheel-drive system, allowing the Coupe to sprint from 0-62mph in a claimed 3.7 seconds. 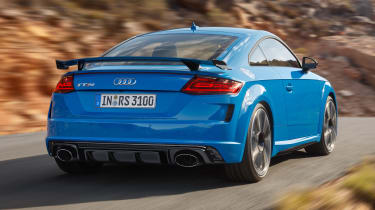 As standard, the top speed of the new TT RS is electronically limited to 155mph but, as an optional extra, Audi will remove the limiter allowing a top speed of 174mph. The characteristics of the engine can also be modified using Audi’s on-board “drive select” system, and the engine note can be altered with a set of active exhaust flaps.

Chassis revisions over the standard TT include a pair of ventilated, perforated discs for the front axle, a new adaptive steering set-up and lower, stiffer sports suspension. 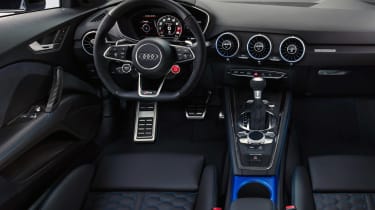 Inside, the new Audi TT RS gets a pair of Alcantara-trimmed sports seats, a leather RS steering wheel, a 12.3-inch digital gauge cluster with shift light and a series of 'RS' badges for the door sill trims, shift paddles and floor mats. An optional RS design package adds either red or blue highlights for the air-vents, seatbelts and doors.

Other features include satellite navigation with voice recognition, support for a roaming Wi-Fi hotspot, a 680W Bang & Olufsen sound system and Audi’s own smartphone interface, allowing the driver to stream content from their phone directly to the infotainment system via USB.

Click here for our review of the new facelifted Audi TT S...