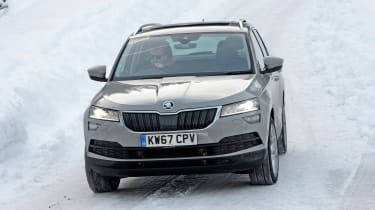 Car buyers can’t get enough of SUVs, which is why every major maker is expanding its line-up in this rapidly growing area of the market.

Latest to arrive on the scene is the new Skoda Karoq, a model which has an integral role to play in the firm’s long-term plan to significantly increase sales by 2025. More than that, though, it has a hard act to follow, replacing the much-loved Yeti as the company’s contender in the mid-size SUV class.

With the Karoq now arriving in UK showrooms, we’ve produced this in-depth special report on what it takes to bring a cutting-edge SUV to the market. We’ve had exclusive access, both in the Karoq’s home of the Czech Republic and here in Britain, to the people who designed and developed the car – as well as those who will now sell it to customers across Britain.

We find out the back story to this compelling new model and get under the skin – both on (and off) road and in the showroom – to see if Skoda has created another winner in the Karoq. It’s an essential guide to one of the most exciting new cars of 2018.

Scroll down for our interview with Kirsten Staag, Skoda's UK head of marketing, or click on the menu to the left for the full story on the new Skoda Karoq... 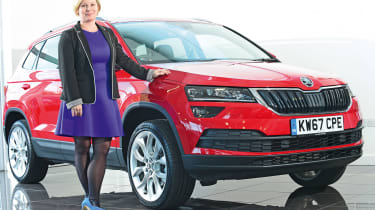 The Karoq launches at a time when things are going very well for Skoda in the UK; 2017 was another record year with the launch of the Kodiaq paving the way for its smaller SUV sibling.

But the Karoq enters one of the most fiercely competitive market classes and replaces a much-loved, iconic car that really helped to transform Skoda’s brand and fortunes: the Yeti.

That’s one heck of a challenge, but one which Skoda’s head of marketing, Kirsten Stagg, and the rest of the Czech manufacturer’s team is relishing.

“It’s a really competitive segment and you really need to have the whole package to succeed,” Stagg tells us. “I think the Karoq has that. It’s got the stylish design, so it looks great on your driveway, but it’s also really easy to live with because of its spaciousness and its practicality.”

But will it wheedle its way into buyers’ affections in the same way the Yeti did? “People have had a real passion for the Yeti,” says Stagg. “It’s distinctive and draws a strong opinion either way. 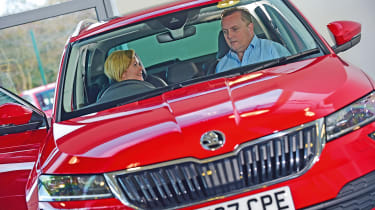 “And that’s what’s interesting about Karoq; it has a broader appeal. We spoke to some Yeti customers who were passionate about their cars and we showed them the Karoq and they said: ‘yeah, great’.

“Some of the more practical things that Yeti customers loved we’ve brought through into the Karoq. They loved the practicality of the Yeti, and the great thing about the Karoq is that it’s slightly bigger, with more boot capacity and even more space inside.”

The newcomer also continues the range of Simply Clever features for which Skoda has become famous. “I’m a frequent user of the ice scraper that’s hidden away behind the fuel filler flap,” Stagg admits. “But for me personally, the highlight is the umbrella in the door; such a clever thing and in the UK there’s always a need for it! It’s these simple things that make a difference.” 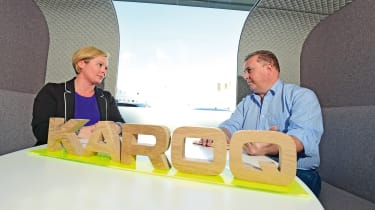 Skoda showrooms are busier places now with two SUVs and Stagg is pleased with how the cars line up together. “The Karoq looks part of the new SUV family,” she explains. “The Kodiaq really helped us to pave the way there and I think the Karoq sits perfectly alongside it as its slightly smaller counterpart.

“Undoubtedly it opens up a whole new demographic to us and we’ve already seen that transition with younger people and families taking more interest in the new model.”

It also means Skoda dealers, who are already some of the best performing retailers according to our annual Driver Power satisfaction survey, are upping their game even further. “We’re seeing a lot of premium customers coming in and trading their cars for our cars, and they’re spending longer in the showrooms, too,” says Stagg.

The dealers will have a bit of help in the shape of one of the UK’s highest-profile singers, Paloma Faith, who’s been signed up as a new Skoda ambassador. 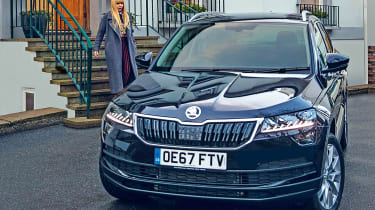 “We’re hugely excited about working with Paloma,” says Stagg. “She’s hugely talented and extremely popular among a female and a male audience. This is a real opportunity to engage with our female customers. We’ve got a really exciting campaign where Paloma will be not only performing in the advertisement, but recording the song that will be the soundtrack for our campaign.”

Faith, and Skoda, will also be working with the Prince’s Trust, as Stagg explains: “We’ll be launching a partnership, the Driver’s Seat Initiative, creating a platform that will enable us to give back to local communities to essentially upskill people who can help to give young people more confidence through music. Paloma will be part of the panel supporting that.”

With so much clever thinking in the car itself and the way it’s being brought to market, it looks like the Karoq could help make 2018 another record-breaker for Skoda.

Click below or on the top left of this page for more on the Skoda Karoq...