We find out if the new Skoda Karoq has the neat, practical touches to handle everyday family life 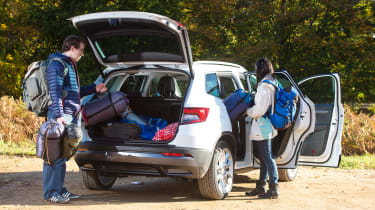 ‘Simply Clever’ is one of Skoda’s marketing slogans, and when you spend time in one of the brand’s cars you’ll quickly notice there’s plenty of truth behind the words. The company is known for its range of clever approaches to improving practicality; everything from umbrellas stuffed inside doors to shopping bag hooks in the boot.

The new Karoq continues the theme. Like its Yeti predecessor, it comes with Skoda’s ingenious VarioFlex seating system that gives it class-leading practicality, plus a whole host of other innovative features.

To see just how versatile the cabin is, I met up with two of my friends, keen hikers James Turner and Minna Chang, who’ve spent lots of time perfecting the art of loading a car with gear. I asked them to come prepared with hiking kit, including muddy boots and sleeping bags to put the Karoq’s practicality to the ultimate test. 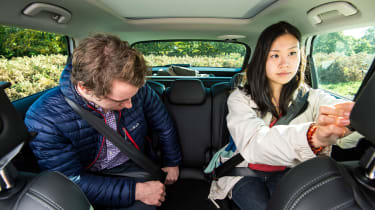 Things got off to a good start. Straight away, the 588-litre boot (479 litres with the rear seats slid back) was big enough for several sleeping bags, two tents, rucksacks plus plenty of hiking gear.

The removable rubber mat also caught James’ eye. “I like this,” he said. “When you come back to a car with muddy kit, the last thing you want to worry about is staining the boot, but with a rubber floor that can be removed and wiped clean in seconds there’s nothing to worry about at all.”

James and Minna were equally impressed by the 1,605-litre load capacity when the rear seats are folded, but what they hadn’t expected were VarioFlex seats; not only do these fold, they also slide and can be removed from the car altogether. The system was a winner in the Yeti, so it made perfect sense for Skoda to carry it over in the Karoq. This was a pleasant surprise for James and Minna. 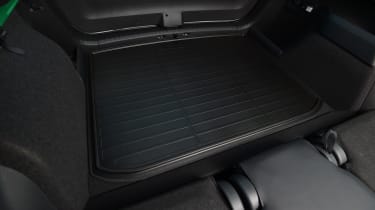 “If I were moving house this would be perfect because the load space increases by so much,” Minna said. She was right – VarioFlex gives the Karoq class-leading practicality, increasing the boot space to 1,810 litres with the seats removed.

Folding and removing each of the seats took James and Minna only a matter of minutes, and although the seats were a little bit heavy to lift back into the car, they had no problems reattaching the locking mechanism. “It’s very cleverly engineered – it takes just seconds to figure this out,” James explained. 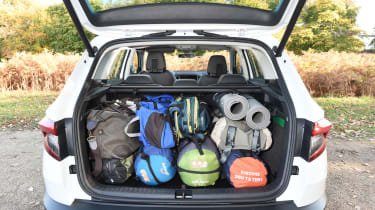 With the seats back in place, our two testers climbed into the rear to find out just how much space passengers back there have to play with. Both remarked on the comfort and the amount of legroom, while the high roofline meant that 6ft-tall James and 5ft 4in Minna had loads of headroom.

“From the outside, the Karoq doesn’t appear particularly large, but there are clever features inside to give it extra levels of practicality that I haven’t seen in other vehicles,” James concluded. Based on their feedback, the newcomer looks to be another winner for Skoda.

Read our review of the Skoda Karoq in 1.0-litre petrol form…