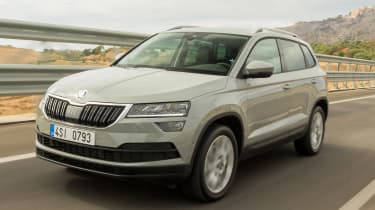 The Skoda Karoq wades into the growing small SUV sector and highly impresses, building on Skoda’s ethos of offering strong value for money. While we’d normally recommend the 1.0-litre TSI in most VW Group cars, we’d stick with the more punchy 1.5 if your budget can stretch as it’s even sweeter to drive and isn’t that more expensive to run.

Small SUVs are appearing thick and fast in 2017 and the latest is the Skoda Karoq – designed to take on class favourites such as the SEAT Ateca and Peugeot 3008. The new baby Skoda SUV has already proved its mettle and impressed us, but that earlier drive was in the range-topping 1.5-litre turbo petrol. Here we try the 1.0-litre in mid-spec SE L trim – the Karoq that in theory should be the best buy.

For starters it has the engine that in most other VW Group products is the best all-round choice. Take the recently updated Volkswagen Golf for example – while the 1.5 is the more refined and punchy engine, the smaller 1.0 offers similar performance and is cheaper to run.

Though down one cylinder compared to the new 1.5 TSI, the three-pot 1.0-litre makes a fine fist of things. Its modest 113bhp is helped along by a little turbocharger, with the bulk of the small engine’s punch kicking in low down the rev range to ease progress. Keep the engine within the 2,000 to 3,500rpm band and Karoq performs reasonably enough with 0-60mph taking just over 10 seconds. Add in a claimed 52.3mpg and CO2 emissions of 121g/km and the 1.0 TSI should be cheap to run. 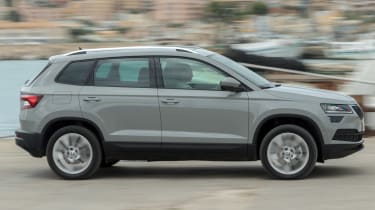 Mid-spec SE L is the trim to go for too. Even the basic Karoq SE come with 17-inch alloys, privacy glass, dual-zone climate control, and safety kit comprising front assist, pedestrian monitor and a driver fatigue sensor. But the step-up to SE L for £2,290 is worth it as 18-inch alloys, an eight-inch touchscreen with sat-nav, MirrorLink, Apple CarPlay and Android Auto, keyless entry, full LED headlights, Alcantara upholstery and heated seats are thrown in.

The wealth of extra kit just adds an additional layer of style and convenience to the cabin moving it above and beyond its main rival the SEAT Ateca. While the Spanish SUV has quite a blandly styled dashboard made from scratchy plastics, the Karoq gets a slightly more stylized look and there are acres of soft, squidgy plastics across the top of the dash and doors. Overall, it’s a much more pleasant place to sit.

SE L models also get Varioflex seating. Carried over from the Yeti, SE L and Edition Karoqs have three individual rear seats and which tilt, recline, fold up and can even be removed all together – do this and there’s a cavernous 1,810 litres of storage space on offer. 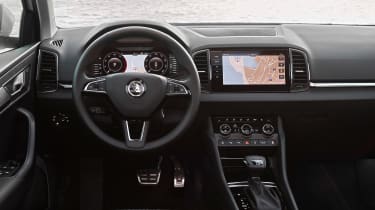 But while the trim level gets our thumbs up, to our surprise it’s the more expensive 1.5 TSI we’d go for. Under hard acceleration the small little 1.0 engine can get quite vocal and transmits a few too many vibrations through the pedals. It feels just a little at odds with the Karoq’s surprisingly grown up and polished character.

While the Karoq shares its platform and a large number of components with the SEAT Ateca (squint and it even looks like the SEAT), it drives noticeably differently. The Karoq’s steering feels slightly less involving and it has a far softer suspension set-up than the Ateca, which gives a much more comfortable ride especially around town and at motorway cruising speeds. It’s only some wind whistle around the overly large door mirrors that disrupts what is a hugely refined car.