What is MirrorLink? Guide to the car smartphone hook-up system

Our guide to Mirrorlink the most popular automotive smartphone integration system that mirrors your phone screen in your car. 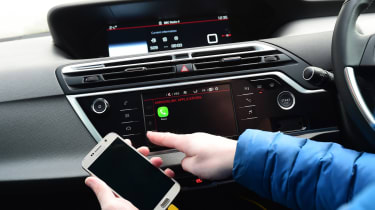 MirrorLink is a car based technology system that is designed to allow you to safely access information, entertainment and communication features of your mobile phone while driving.

MirrorLink has become increasingly popular alongside similar systems like Apple CarPlay for iPhone users and Android Auto, because as smartphone users become ever more reliant on their devices, the advantages of accessing apps, playlists and data on the move have become more and more appealing. The big difference between the three systems is that while Apple CarPlay and Android Auto are closed proprietary systems with ‘built in’ software for functions such as navigation or voice controls – as well as the ability to run certain externally developed apps – MirrorLink has been developed as an entirely open source system.

Originally developed by Nokia for its own mobile phones, MirrorLink compatible phones are now much more widespread since the tech has been taken over by the Car Connectivity Consortium, which is a non-profit industry body dedicated to safe and simple connections between vehicles and smartphones of any make. Its aim is to work with as many individual smartphone operating systems as possible, and various MirrorLink Android phones are available, although iPhones are not currently supported and you can check which phone models can be connected at the MirrorLink website. Either way, MirrorLink claims it is currently the industry leader as it is available on more cars and smartphones than any rival system.

Do many cars and phones have MirrorLink?

There are dozens of consortium members, and CCC car makers include Citroen, Fiat, Honda, Mazda, Mercedes-Benz, Subaru and the VW group. CCC phone makers include HTC, Huawei, LG, Samsung and Sony, while Alpine, Bosch, Clarion, Denso, Harman, Panasonic and Pioneer are amongst the participating members making infotainment hardware for cars.

With such a wide range of Mirrorlink compatible brands and hardware, the system has several advantages over proprietary systems from Apple or Android.

The open source approach means any developers around the world can seek approval for new MirrorLink apps. If they meet the CCC standards they can be certified for use with the system, leaving drivers free to download the MirrorLink apps they want to their smartphones.

If you’re concerned about the future of data privacy and the ‘big brother’ nature of emerging technologies though, you may not like the what the Car Connectivity Consortium has up its sleeve for future development. They are currently exploring technology that will enable MirrorLink to be used as a data sharing system suitable for usage based car insurance. This will enable MirrorLink to send information about your journeys, speed and driving style to third parties, all via an insurance company app on your smartphone.

How does MirrorLink work?

That’s a question with two answers depending on whether you’re asking from a user’s perspective or from a technical point of view.

From the user’s perspective, it couldn’t be simpler. First make sure you have downloaded MirrorLink compatible apps to your phone – we’ve highlighted some below, but for a fuller list visit the MirrorLink apps list on the official website.

Then, once inside your vehicle, your phone must be connected to the MirrorLink onboard system using a cable connection to the car’s USB port or via Bluetooth. If your car has multiple phone connection systems installed – e.g. CarPlay and MirrorLink, you may have to go into vehicle settings and select the correct system.

After that, you select your smartphone settings screen, find a ‘connections’ tab, and select the MirrorLink option. The MirrorLink display should appear on your vehicle’s touchscreen and you can navigate through compatible apps on your phone using the big on-screen icons. Voice control systems, and controls on your steering wheel will also work with MirrorLink too, but your mobile phone itself cannot be used to control functions while the MirrorLink dashboard interface is enabled.

The technical point of view is far too complicated for the purposes of this guide, but basically the MirrorLink system works with a variety of existing technologies such as IP, USB, Wi-Fi, Bluetooth, RTP and VNC, integrates various car signals like GPS location and vehicle speed, plus system control hardware, and makes it all work seamlessly thanks to clever coding.

Although this system is called MirrorLink because it theoretically ‘mirrors’ your phone screen on the dashboard, in fact the MirrorLink dash interface is far less complicated than your phone.

Part of the reason is that it creates big ‘driver friendly’ icons for the touchscreen, but it’s also because there are only a limited number of MirrorLink apps that you can download and run.

However, as well as the expected apps like Facebook, Twitter and Spotify, and a host of radio apps, weather, travel info, Parkpopedoa and car company apps, there are a few more intriguing selections available. For example Glympse, which allows you to send your position to friends or family, and for them to track your journey home, and others, which record vehicle data and provide tips on a more efficient driving style. More apps are under development all the time, too, and as well as the prospect of MirrorLink enabled insurance ‘black box’ apps, there’s a project underway to integrate MirrorLink with car makers’ keyless go systems. This will potentially be useful in all sorts of future scenarios like car sharing schemes where your smartphone will unlock vehicles for occasional use.

What phones are compatible with MirrorLink?

As stated above, there’s a wide variety of mobile phones that will hook up to a MirrorLink enabled car, including most Android models. iPhones are not officially compatible as Apple prefers proprietary systems, but because MirrorLink is open source many pundits suspect there’ll be a workaround app developed by an independent third party that may bring the iPhone into the MirrorLink fold. We’ve not heard anything to confirm this, however.

What cars have MirrorLink fitted?

MirrorLink is widely fitted to VW Group cars, as well as Fiat, Peugeot/Citroen, Honda, Hyundai, Mercedes-Benz, SMART, Suzuki and Toyota vehicles. The best and most up-to-date list of cars fitted with MirrorLink can be found on the official website.

Have you used MirrorLink? Tells us what you thought of it in the comments section below...