Highways England chief executive says some motorways could operate at 80mph, but that shift looks unlikely 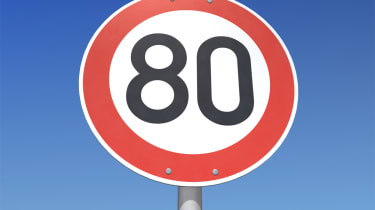 The UK’s motorway speed limit could be raised to 80mph, according to a senior road chief, but is unlikely to increase due to “public opinion and social views”.

Jim O’Sullivan, chief executive of Highways England, which is responsible for the 4,300-mile Strategic Road Network of motorways and major trunk roads, told the Daily Telegraph: “We have not done a formal safety analysis but there are parts of the network that subject to a safety analysis could probably operate at 80 miles an hour.”

The 70mph motorway speed limit was introduced in 1965. It was originally intended to be a trial limit, brought in as a result of safety concerns, but in 1967 it passed into law. O’Sullivan said “one would want to reach a consensus” before increasing the speed limit, but he thought there was a “very, very low probability” of reaching agreement.

O’Sullivan also said classic cars could potentially be banned from UK roads within the next 30 to 50 years, as their inability to communicate with autonomous cars could make them “hazardous”. He said the prospect of phasing conventional cars off the Strategic Road Network was a “long way” off, but that: “Ultimately I can see a world in the very distant future where they don’t come out onto the Strategic Road Network.”

Read: police could take a tougher approach to speeding, with fears that the ‘10 per cent plus 2mph’ buffer gives the impression that speeding is ok…