The new Mercedes GLB SUV offers plenty of space and comfort, but what’s it like from behind the wheel? 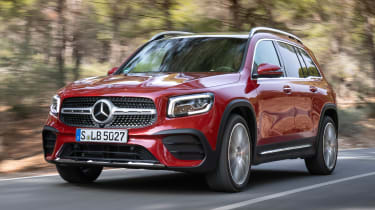 The world doesn’t need any more SUVs, but the GLB stands out as one that does things a little differently. It puts practicality above all else, and as a consequence, looks all the better for it; its strong, boxy appearance gives it a true SUV aesthetic. It’s not, by any stretch of the imagination, exciting to drive but it is comfortable and refined, and has one of the finest interiors in its class. A truly worthy contender for your next family car.

Mercedes has one of the healthiest SUV line-ups in the business, up to now, comprising seven different models. But the German firm appears to have spotted a gap nobody else knew existed and created this, the new GLB, which takes the SUV tally up to eight.

Rather than stick with its predictable and (let’s face it) rather dull Russian-doll approach to styling, Mercedes has given the GLB a far more boxy and purposeful look. In fact, from some angles there’s a more than a whiff of baby G-Wagen about it. It’s a welcome tonic to the current crop of rather repetitive SUV silhouettes.

By Mercedes’s own reasoning, there is some logic to the car’s existence; SUVs account for a third of the firm’s sales and compact models for another 25 per cent. And the company wants to cash in on these two large volume segments. 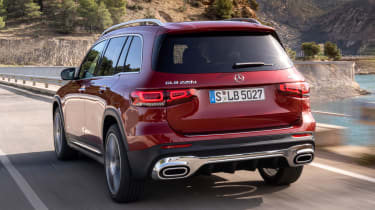 Despite sitting in the segment beneath the more premium GLC, there’s only millimeters between the two cars; the GLB may be 22mm shorter and slightly narrower, but it is 24mm taller. And to give it a unique selling point, buyers can spec the GLB with seven seats, as a £750 option. We can’t give you a verdict on whether they are worth having, though, because our test vehicle didn’t have them fitted.

As you’d expect, there’s a full spectrum of engine options available, starting with the 161bhp 1.3-litre turbo petrol in the GLB200 and rising to the 306bhp 2.0-litre turbo in the range-topping GLB 35 4Matic AMG. Further down the line, there will be a plug-in hybrid edition, along with a fully electric EQB next year.

For now, the GLB200 d and GLB220 d will make up the bulk of sales. We’re driving the latter of the two diesels here, the 2.0-litre four-cylinder motor pushing out 187bhp and 400Nm of torque. 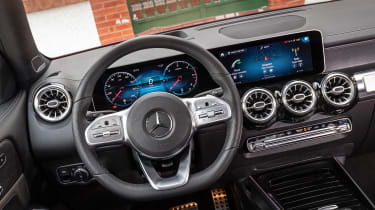 The diesel engine is a known quantity, being available across the GLC and C-Class ranges in various states of tune. Its fairly generous power output will be more than sufficient for the car’s intended use as a family runaround; peak torque at 1,600rpm makes it a decent performer, able to cover 0-62mph in 7.6 seconds. The diesel clatter is largely well suppressed from the cabin, although if you extend the engine into the upper reaches of the rev limit, it’ll make itself known.

However, the eight-speed dual-clutch transmission rarely lets that happen, working its way up through the gears quickly and seamlessly to keep progress hushed and fluid. You can, if desired, select Sport mode on the GLB’s Dynamic Select but all that appears to do is make the gearbox needlessly hang on to gears. It’s best left alone.

Every model as standard feature steel springs - there’s no option of air suspension, another point of difference from the GLC - but for the most part the ride is soft and well cushioned, which encourages a more laid-back driving style. That’s something that is reinforced when you navigate tighter corners; the tall body makes the GLB lean noticeably if you carry anything more than a fraction too much speed.

The steering is a weak point; it’s awfully light and vague, which isn’t a great pairing with the GLB’s rather lazy body control. However, this is not a car that has been set up to appeal to keen drivers, so numb steering is hardly going to be a deal-breaker.

Where the GLB will certainly win over some buyers is its focus on practicality. Mercedes has stretched the SUV’s platform, which is shared with the A-Class hatchback, to the extreme to make it as spacious and accommodating as possible. Rear passenger space is by far the best of any rival at this price point and more generous than in a GLC; the tall body creates acres of headspace and the long wheelbase means three adults can comfortably sit in the back. 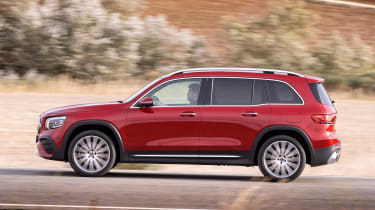 You have to step up to the class above, to models such as the Land Rover Discovery Sport and VW Tiguan Allspace, to find comparable levels of rear passenger space.

And while the boot space isn’t visibly larger than its bigger brother’s, a glance at the spec sheet shows you that its is indeed 20 litres larger, at 570 litres. Go for the seven-seat option, however, and that figure drops to a still-generous 500 litres.

At this point you’re probably wondering why you’d even consider the GLC. Mercedes claims the GLC caterers for a different customer, one that puts premium qualities ahead of practicality. The main point of difference is that the GLC can be had with a six-cylinder engine as well as air suspension. But then, speccing both of these features pushes the GLC well north of £50,000. 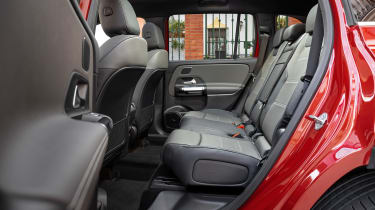 But you certainly don’t feel short changed in the GLB; the overall interior design and features have been lifted wholesale from the A-Class hatch, which is by some margin the finest cabin in its class. Soft leather, cool aluminium and polished black plastics cover most surfaces, with Merc’s MBUX infotainment system the main focal point on the central 10.25-inch colour display.

There is, however, a considerable saving to be had - over £5,000 - if you’re willing to make do with slightly less horsepower, settle for the GLB200 d and step down to the still-generously equipped AMG Line model. 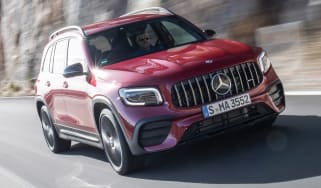 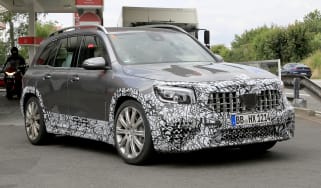 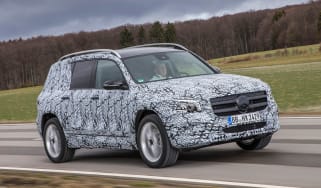 The new rugged Mercedes GLB SUV is set to arrive in November. We join the development team to see if it stands a chance of success
Skip to HeaderSkip to Content