Is the new 302bhp Mercedes-AMG GLB 35 good enough to challenge the Audi SQ2 and Cupra Ateca? 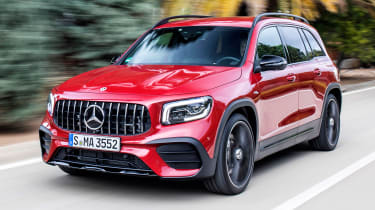 There's quite a lot to like about the Mercedes-AMG GLB 35. It’s a well-rounded and premium performance SUV, and one that manages not to compromise on space, practicality or usability. But that is going to come at a price; Mercedes reckons it could cost as much as £50,000 when it goes on sale in the UK next month.

Let’s face it, SUVs are here to stay. But the new Mercedes GLB does a good job of standing out on account of its unconventional, boxy exterior. We’ve already established that as a sensibly-powered diesel model it's a very well resolved family car, but one that has driver involvement firmly at the bottom of its list of highlights.

Mercedes-AMG, however, has attempted to address that with the new GLB 35 4MATIC. It goes on sale at the end of this year, slightly behind the rest of the range, as AMG’s answer to the Audi SQ2 and Cupra Ateca. There’s no official pricing yet, but don’t expect any change from £50,000.

Like its main rivals, the GLB 35 is powered by a 302bhp 2.0-litre four-cylinder turbo, which drives an eight-speed dual-clutch gearbox and Merc’s 4MATIC four-wheel drive system. Like most systems it’s variable – sending up to 50 per cent of the engine’s torque to the rear axle when necessary. 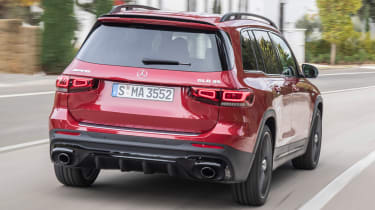 There’s AMG-specific tuning for the dampers and suspension, while a new subframe and completely new control arms have been fitted to help minimise body movement during cornering. And to ensure there’s sufficient stopping power, new AMG-specific brakes, which are larger and more powerful than the regular car’s units, have been added.

The chassis tweaks and power upgrades have had a profound effect on the GLB, transforming what was a rather laidback and forgettable SUV to drive, into one that has many likeable qualities.

Importantly, AMG engineers have been able to bring a serious performance upgrade to the GLB 35 without dramatically affecting its family-friendly levels of comfort. Sure, there’s a slightly firmer edge to the ride, but in the softest of the GLB’s adaptive damper settings there’s a surprising degree of suppleness to the way drives. Obviously, the further up the plethora of driving modes you go, the more brittle it becomes.

The 2.0-litre turbo is identical to other 35-badged editions in the AMG stable, and as ever it serves up impressive if not sublime performance. Below 3,000rpm the engine can feel a little dormant, but if you keep the GLB above that magic mark you can make brisk and entertaining progress. Mercedes claims 0-62mph in 5.2 seconds, which puts it in the same ballpark as its rivals. 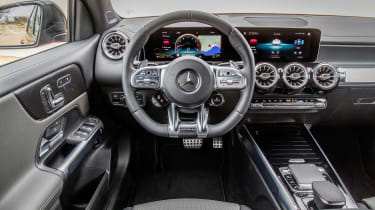 The new suspension set-up also means the GLB 35 handles and corners with more agility and poise than its boxy proportions would have you believe. Where the regular SUV pitches and rolls under braking and cornering, the AMG edition remains surprisingly flat with taut body control. Quick steering, which is a little on the numb side, adds to its sense of agility.

There are, of course, limits to its ability. The chassis is set up for stability and surefootedness at speed rather than real adjustability; push a little too enthusiastically into a corner and the GLB 35 will gently nurse itself into understeer. Having said that, neither the SQ2 nor Cupra Ateca fare any better here.

Where the GLB has the upper hand is with its greater levels of practicality. UK specs are still being finalised but there’s a possibility that all AMG 35 editions come as standard with seven-seats – something none of its rivals can compete with. Neither is the amount of space inside; there’s vast amounts of head and knee room in the GLB, while the 500-litre boot is more than spacious enough to swallow everything a family can throw at it.