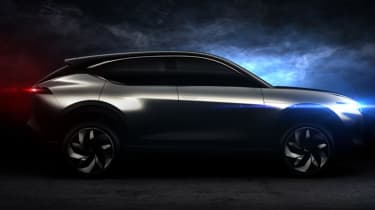 Following the reveal of the HK GT at the Geneva Motorshow, Hybrid Kinetic Motor Group (HKG) and Pininfarina will be presenting two new electric vehicle concepts – a saloon and an SUV – at the 2018 Auto China show in Beijing.

Full details for the cars have yet to be released but it is expected that the new models will feature the same powertrain as the previous concepts from HKG. The company has claimed a 620-mile range from its high-tech range extended battery that’s capable of up to 50,000 recharge cycles.

The first of the two Pininfarina-designed models to be announced is the H500 saloon. From what we can see of the teaser shots, the concept, which is due to be revealed on April 25, features a four-door, fastback design. Opting for this body shape is clearly a nod to the high demand for saloon cars with large rear legroom in China. The second car, the K350, is a new four-seater SUV with bold exterior lines and sharply sculpted light clusters much like the K550 and K750 models revealed at the Shanghai show in 2017.

In terms of interior, the H500 features a curved wrap-around driver display screen and another media screen in the centre console. An image from the inside of the K350 shows the four-seater layout with contrasting headrests and stitching on the upholstery.

There's no word on when production versions of K350 and H500 models might see the light of day, however, other models in HKG's range are due to hit the roads in China later on this year. Whether they make it to the UK or not remains to be seen.

Enjoyed reading about these concept cars? Then why not read about the best upcoming cars in 2019?