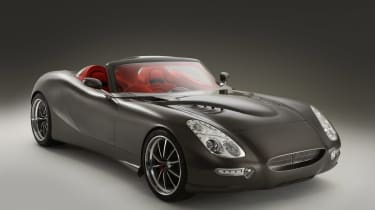 The all-new Trident Iceni Grand Tourer has been confirmed as one of the stars of the Salon Prive show, which will take place at west London’s Syon Park from 5 to 7 September.

The Trident is powered by a front-mid-mounted 6.6-litre turbodiesel engine, which produces 430bhp in standard tune. An upgrade to 660bhp is available as an option, too.

The immense power of the engine ensures impressive performance. Trident claims that the Iceni can sprint from 0-62mph in just 3.7 seconds, and will hit a top speed of almost 200mph.

However, this doesn’t come at the expense of economy. Its Torque Multiplication technology allows the engine to rev at just 980rpm when the car is travelling at 70mph.

Trident claims that at this speed, the Iceni still manages 68.9mpg and can travel more than 2,000 miles at motorway speeds on one full tank of diesel. The engine is also capable of running on bio diesel, palm oil or linseed oil.

The Norfolk-based maker builds each car to order. Order books for the diesel-only sports car will open at the Salon Prive show, with prices starting from £75,000.