Bell & Ross might not be the first name that springs to mind when you think about a luxury supercar, but among top-end watchmakers it’s a renowned marque.  Now, the company has released a new line of watches inspired by a car – but only after it had designed the car too. The concept supercar is named the Bell & Ross AeroGT and was unveiled at a trade show in Switzerland.

Bell & Ross actually has form in this area. It created another concept car, back in 2014 but where the the B-Rocket combined vintage design cues with modern touches, the AeroGT is slick and futuristic all round. 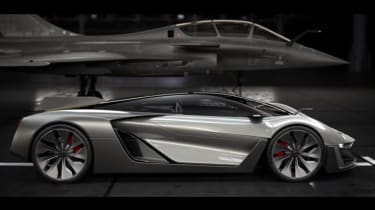 The AeroGT combines all the things we like to see in a concept car – a striking design and an engine to back it up. The company claims that, if it were built, the AeroGT would be fitted with a twin-turbocharged 4.2-litre V8, producing 602bhp. We bet it sounds great on tickover.

The sleek design is inspired by GT racing cars, but the long tail and pushed-forward cockpit are straight from a fighter jet. The massive exhaust pipes also come straight from the aircraft world. It’s got the aerodynamics to match too – the swooping curves surround a body that’s only just over 43 inches off the ground. 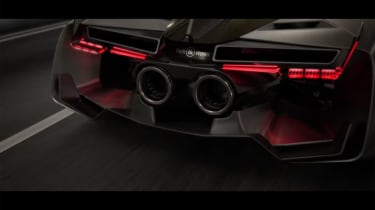 Bruno Belamich, Bell & Ross’ creative director said: "Every year, in order to create new models, I need new sources of inspiration. The aim was to produce a car that can ‘hold its own’, even amongst automotive professionals. But above all, this real challenge was a great joy."

The AeroGT concept was the design study for the BR 03 AeroGT line of watches. These red and black watches feature an exposed mechanism, so budding engineers can watch the gears as they move throughout the day. They're available to buy now from any Bell & Ross watch dealer.

Can this luxury watchmaker teach car designers a thing or two about their art? Let us know what you think in the comments below...