Mike Rutherford thinks the process for buying a new car on finance is too confusing for most, and needs to be simplified 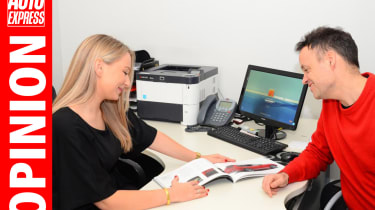 Hoping to score a brand new car, but haven’t got enough in your savings account to pay for it? I’m not surprised. The average price of a factory-fresh model is now around £30,000 – that’s more than the annual income enjoyed by most people.

So just as most Brits need loans when shopping for homes of their own, the same is true of the motoring masses seeking the keys to new cars. The Finance and Leasing Association has just reported that the value of finance deals used to buy new cars soared to a monthly record of £3.6bn in March.

Were it not for such financial products for seemingly grateful consumers, the motor industry probably couldn’t survive with cars averaging £30k a pop. But the Financial Conduct Authority is uncomfortable. It talks about “a lack of transparency, potential conflicts of interest and irresponsible lending in the motor finance industry”.

It has a point. I know from my conversations with friends, associates and callers to radio phone-ins that some have naively borrowed money to “buy” cars they didn’t know the price of. They tend not to know what Annual Percentage Rates (APRs) they’re paying, either. And sometimes the vehicles they thought they’d purchased are, in effect, borrowed rather than bought. Oh dear.

Regardless of the type of loan/finance deal you commit to, at least clue yourself up on vital facts such as the precise value of the current car you’ve got. It may be more valuable than you think – especially if you sell privately. Next, get the definitive list price and maximum discount price for the car you’re after. Then insist on clear written confirmation of your finance deal’s APR (the overall interest plus any additional fees expressed as a percentage), plus the number of months you’ll be paying it.

This is imperative, yet is far too often ignored by consumers. A motor trade friend admitted to me that punters just don’t mention APRs these days. And that’s fine by him! Fact is they range from zero per cent to 100s or 1,000s of per cent APR (heinous – but still legal). You have been warned. Also, you are – with respect – being told something you should not ignore or forget: Those one to five per cent APR offers may look comparatively attractive. But they can and will be beaten by one of the modern motor industry’s greatest phenomenons – the zero per cent APR deal. Insist on it. Milk it. Be thankful for it. Enjoy it... while it lasts.

Have you recently bought a new car on finance? Let us know about your deal below…