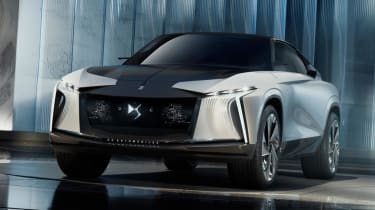 DS has unveiled the Aero Sport Lounge concept ahead of this year’s Geneva Motor Show. It’s a streamlined, all-electric, pseudo-SUV – and it’s a vehicle that the French brand hopes will revolutionise the electric luxury car market, thanks to its focus on efficiency.

The concept’s electric drivetrain was designed using knowledge gained from DS’s experience in the Formula E racing series. It comprises a 670bhp electric motor and a floor-mounted 110kWh battery pack, which provides a claimed 0–62mph time of 2.8 seconds and a range “greater than 400 miles.”

The DS Aero Sport Lounge concept measures five metres from nose to tail and rides on a set of 23-inch alloy wheels. Up front, there’s a pair of Matrix LED headlights and the radiator grille has been replaced with an interactive screen, which features an illuminated badge. 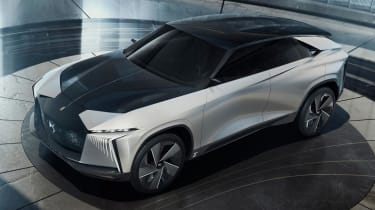 Speaking to Auto Express, DS design chief Thierry Métroz explained that the large dimensions, poor aerodynamics and heavy kerb weights of traditional SUVs means that they are unable to properly exploit the benefits of electric powertrains – which is where the Aero Sport Lounge concept comes in.

DS says this concept previews a new body style for the electric age – and it’s been designed to be as aerodynamically efficient as possible. The company claims the car’s steeply raked roofline and broad-spoke alloy wheels reduce drag, while the radiator grille and front bumper efficiently directs air down the car’s flanks to a pair of aero channels.

Métroz hinted that the look of the ASL will influence the next generation of DS models, and that a production-ready version of the concept could reach showrooms by 2025.

The interior of the Aero Sport Lounge concept is equally unconventional, featuring a range of unusual materials. The seats are trimmed in a fine-weave satin cotton, while the doors sport a three-material microfibre cloth. The concept’s dashboard and seat backs are also clad in dried, untreated rye straw, which DS says is both heat and water resistant.

What do you make of the DS Aero Sport Lounge concept? Let us know in the comments section below…