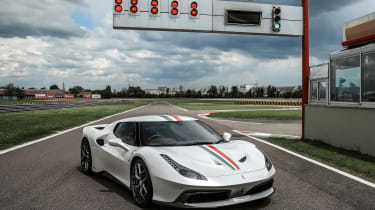 Ferrari's 488 is the hottest new supercar to debut, but the Italian supercar maker hasn't finished with its predecessor yet. Maranello's latest creation - a one off 458 Speciale - has been unveiled for the first time.

Designed in-house by the Ferrari Styling Centre, the 458 MM Speciale has been built for an "enthusiastic British owner" whose identity is yet to be revealed. It's based on the existing model underneath, but the aluminium bodywork has been uniquely hand-crafted.

The buyer specified a 'visor' effect for the front and side windows, blending all three into a wraparound design thanks to a black A-pillar and lowered roofline.  The MM Speciale also gets new carbon-composite bumpers front and rear, revised air intakes, a new side scoop design and modified rear light clusters. 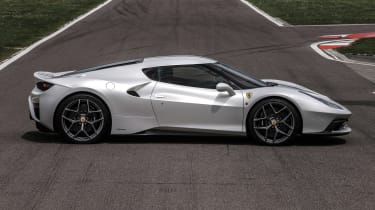 Bespoke wheels and a new rear spoiler also feature, while the transformation is complete with 'Biano Italia' paint and livery stripes inspired by the Italian flag. Inside, there's an enhanced sound system and white-stitched leather upholstery.

As the 458 Speciale is no longer in production, this one-of-a-kind model could prove extremely valuable when it hits the market in future. For now it's likely to be kept under lock and key by its owner, however.

What do you think of the one-off Ferrari 458 MM Speciale? Let us know in the comments section below...