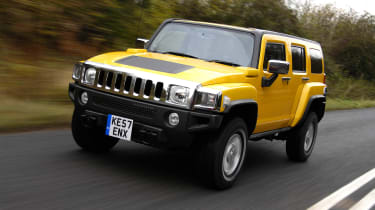 General Motors is planning to resurrect the Hummer name with all-electric power, according to a report issued by the Wall Street Journal.

The publication, citing insiders at GM familiar with the matter, claims that the company plans to bring back the nameplate have already advanced significantly, suggesting that a television advertisement for reborn Hummer could air in the United States next month, during Super Bowl LIV.

The Wall Street Journal claims that GM isn’t planning to bring back Hummer as a marque, but instead as a model to be sold under the long-standing SUV and pick-up truck brand GMC.

The new Hummer model itself is anticipated to be on sale in early 2022, positioned as a low-volume, rugged, off-road-ready electric pick-up truck. As such, the supposed reborn Hummer will line-up as a rival for the recently revealed Tesla Cybertruck and the upcoming Rivian R1T.

It’ll also kickstart an electric product offensive from GM, with “several” large, fully-electric SUVs and trucks to follow, using the same architecture but released under established brands like Cadillac and Buick.

The Hummer name has not been sold by GM since 2010, after a failed sale of the brand in the wake of the American giant filing for bankruptcy in 2009. Originally a spin-off of the US Army M998 Humvee, Hummer followed up the 1992 H1 with the more modern H2 in 2002, before adding the smaller H3 - which was sold in Britain in right-hand-drive format from 2007 until the company’s demise.

What do you think of an all-electric Hummer? Let us know your thoughts in the comments below...