What does the future hold for last-mile delivery? 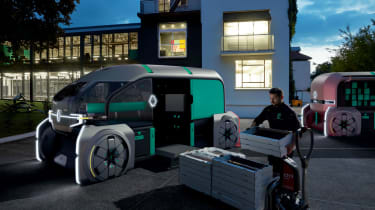 The rise of e-commerce and growth in package deliveries has had a ripple effect on UK roads. One in every £5 spent with UK retailers is now online, and while that has had a knock-on effect by shrinking the high street, it has also increased the requirement for light commercial vehicles to deliver products to suit individuals – be it a convenient time or location.

According to a Government Office for Science report on the future of mobility, the increasing number of light goods vehicles (LGVs) on UK roads is driving growth in the freight transport industry (between 2000 and 2015 there was a 48 per cent increase in the number of LGVs licenced). Furthermore, recent studies have shown that last-mile deliveries now make up as much as 30 per cent of traffic in cities.

The last mile is the shortest and quickest part of the entire logistics journey, but it’s also the one with the most potential to go wrong. As reported by Supply Chain Dive, the last leg of a journey can account for up to 28 per cent of a product’s total transportation cost. Add to that increasing urban congestion or remote locations that are difficult to find and instances when nobody is around to sign for deliveries, and there’s a risk that items may not make it to their intended destination at all.

With the final phase of the journey becoming ever-more crucial, technology is being introduced to disrupt the transport industry and transform deliveries for the better. As well as finding a more efficient and cost-effective A to B delivery, automation, safety and emission reduction are all key factors when it comes to last-mile innovation.

On the latter front, Renault has already introduced electric LCVs to offer businesses more choice when it comes to the last mile. The manufacturer’s specialist van brand, Renault PRO+, has two electric vans currently available and in use with many businesses: the New Renault MASTER Z.E. and the Renault KANGOO Z.E. 33.

The New MASTER Z.E. offers a 75-mile range* in summer and 50 miles* in winter, with an official WLTP range of 75 miles*. Plus, it can carry payloads of up to 1,100kg. The KANGOO Z.E. 33, meanwhile, has a summer range of 124 miles*, a winter range of 75 miles* and an official WLTP range of 143 miles*. In terms of payloads, it can carry up to 640kg. Consider these capabilities alongside zero emissions when driving, minimal noise pollution and potential fuel and maintenance savings, and you have cost-effective choices available right now. But Renault has also offered a glimpse into the future of urban delivery driving, with the unveiling of the EZ-PRO concept and EZ-FLEX prototype.

First seen at Hannover’s IAA Commercial Vehicle Show in September 2018, the EZ-PRO consists of driverless electric pods that form a ‘train’ behind a lead vehicle. Each pod can be programmed to reach a specific destination to meet consumer needs, whether that be a collection point or the availability of a service.

Revealed alongside a Renault study, which presents a vision of the future of last-mile delivery in 2030, the EZ-PRO still incorporates human interaction, thanks to the lead vehicle’s ‘concierge’ seating. A joystick control allows manual piloting if required, but the pod is designed with autonomy in mind, allowing the concierge to focus on other tasks. For instance, they can direct any pod within the train to a separate destination, allowing it to break away and make a delivery, then reconnect with the lead vehicle when the task is done.

Renault’s goal is to integrate the EZ-PRO into the infrastructure of tomorrow’s smart cities, providing a dedicated solution for deliveries that will reduce congestion and address environmental challenges. At the EZ-PRO’s Hannover unveiling, Renault noted that the concept vehicle “would unlock countless opportunities for our various partners”, whether that be delivery companies themselves or brands looking to offer goods and services in specific locations. 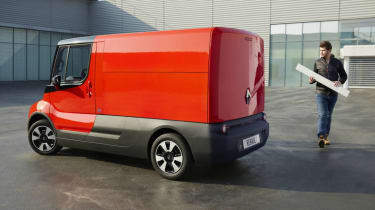 Offering a more immediate solution to last-mile demands and rising urbanisation is Renault’s EZ-FLEX. Earlier in 2019, 12 of the prototype LCVs were loaned out to professionals, companies, cities and municipalities in Europe for a two-year trial run.

With an all-electric range of 62 miles, plus compact dimensions (3.86 metres long, 1.65 metres wide and 1.88 metres tall), a 4.5-metre turning circle and a configurable load space of three cubic metres, the EZ-FLEX is designed to manoeuvre effortlessly through congested cities. Drivers have wide access to the cockpit, with a central dashboard offering clear driving information, pedestrian and environment visibility, and intuitive driving controls.

The vehicles in real-world testing are armed with sensors to track and refine day-to-day operations. Data points including mileage, speed, delivery frequency and load bay use will be transferred back to Renault and allow its engineers to refine the vehicle to best suit the demands of urban delivery. As smart cities evolve and sensors begin to collect and organise more data, logistics firms will be able to analyse traffic flow and dispatch vehicles such as the EZ-FLEX on the last-mile route.

It’s estimated that over 60 per cent of the world’s population will be living in cities by 2030, and with the demand to transport goods quickly and reliably, the cities of tomorrow will need to find new ways of managing road congestion and emissions associated with the last mile. Renault PRO+ electric vans and innovative concept vehicles are looking to meet these challenges head-on.

For more information on the New Renault MASTER Z.E. and the Renault KANGOO Z.E. 33, visit renault.co.uk or your local Renault PRO+ specialist for full details.