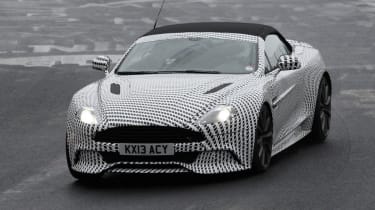 These are the latest spy pictures of the Aston Martin Vanquish Volante and further proof that a soft-top version of the new V12 flagship is just around the corner.

This heavily camouflaged pre-prouction mule was spied testing at the Nurburgring test circuit in Germany where the British brand have a permanent facility for the handling development of all its future models.

Yet  despite the black and white disguise the dramatic front-splitter and rear diffuser, plus a set of distinctive rear light clusters, both give this model away as the open-top version of the latest Vanquish.

Underneath it will share the same hi-tech carbon fibre body work and lightweight aluminium chassis as the coupe, while the naturally aspirated 6.0-litre V12 engine and six-speed ZF automatic gearbox are also likely to be carried over unchanged giving the Volante a healthy 565bhp output and 620Nm of torque.

That could translate to a 0-62mph sprint of around 4.2 seconds - just a tenth less than the hard-top - and a top speed approaching 200mph - although this is likely to be limited when the roof is down.

Other technical highlights include a carbon fibre prop shaft and Brembo carbon ceramic brakes but the roof mechanism itself will be a simple folding fabric design rather than a complex folding hard-top like both rivals the Ferrari 458 Spider and McLaren 12C Spider. However the design is also compact enough to accomodate the same fixed rear spoiler as the coupe.

Aston Martin launched the CC100 concept this weekend as part of its centenary celebrations but the new model cavalcade looks set to continue as the Vanquish Volante could appear at the Frankfurt motor show or even earlier with a price likely to rise to over £200,000 once it arrives in Autumn.