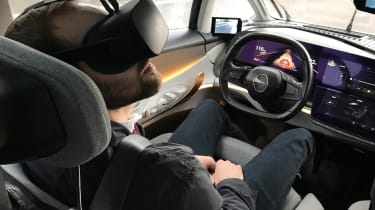 Pavements could soon change size, shape and function depending on traffic and pedestrian needs, after a new ‘smart’ kerbside was shortlisted for a national transport prize.

The FlexKerb system uses colour-changing LEDs embedded in roadside surfaces to alter their uses. When the LEDs are red, for example, the kerbside could be used by pedestrians; when green, it could be for cars, while blue lights could indicate its availability as a cycle lane. Purple lights, meanwhile, could inform couriers and delivery drivers that the roadside is available for use as a loading bay.

• How technology could slash road accidents

Developed by engineering and design firm Arup, the FlexKerb system is among five shortlisted entries for the National Infrastructure Commission’s Roads for the Future competition, which has sought possible solutions for preparing the country’s road network for connected and autonomous vehicles (CAVs).

The system would be monitored by real-time traffic data from smart cameras and sensors, allowing those running it to alter a road’s use depending on demand. This could potentially reduce emissions and make an ideal environment for autonomous cars in the future.

The system’s designers have been awarded £30,000 to further investigate their solution, and will run a feasibility studying using computer modelling of a typical London high street. If successful, a further £50,000 will be awarded to FlexKerb for future development.

The competition to help prepare Britain’s roads for autonomous cars was launched in January, with entrants given two months to prepare and put forward their concepts.

Suggested ideas for consideration included how self-driving and conventional vehicles can coexist on the road, and how roads can evolve to accommodate both autonomous vehicles (AVs) and electric vehicles (EVs). Entries were asked to address three broad themes:

The contest was designed to seek fresh ideas as the Government gears up to ready roads for the advent of driverless cars, shaping how people travel “for generations to come.”

Launching the competition, chairman of the National Infrastructure Commission Sir John Armitt, said: “As car manufacturers invest billions in driverless vehicles we must ensure our roads network can accommodate them. Whether from industry or academia, we want to see [entrants] submit their ideas.”

Innovate UK’s Ian Meikle said that the UK has the potential to be a “world leader” in the field of transport technology.

What ideas do you have for preparing roads for autonomous vehicles? Let us know below…