A meter glitch has put a halt to the rollout of London's new plug-in taxis, with just one licensed so far 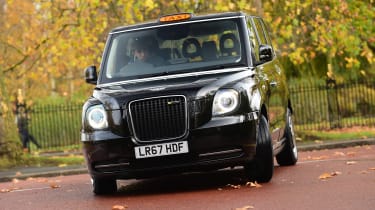 A meter glitch is preventing the first batch of zero-emissions taxis from taking to the streets of London, two weeks after the city introduced new zero-emissions standards on all new taxis.

Since January this year, only taxis with zero-emissions capabilities are allowed to join the existing fleet of 23,000 black cabs. The only model approved for use so far being the TX eCity from the London Electric Vehicle Company (LEVC).

Though hundreds of orders have been placed for the new plug-in range extender taxis, just a single one has been licenced for use, with none yet having carried a passenger on board. This is due to a software glitch with the meter on board the taxis, with LEVC saying some orders will be held back several weeks until the company and its suppliers fix the issue.

An LEVC spokesman said: "The signal from the vehicles and the meters are not lining up and we are working on a solution to fix that issue. We're working on getting an appropriate converter to get the vehicles licenced by [Transport for London] and over to customers."

The company subsequently added that: “Deliveries have been put on hold as a result of an unexpected issue with compatibility with the taxi meters and the taxi. The problem is understood, and it involves the pulse messages sent between the vehicle and the meter.

“We have a solution and are working with TfL and the third-party meter suppliers to get the updated, approved meters installed so we can begin customer deliveries in earnest.”

The £55,599 TX eCity is built in Coventry and has a pure electric range of 70 miles. A 1.3-litre petrol range extender increases the overall range of the vehicle to 400 miles.

Are you keen to try the new plug-in taxi when it finally arrives? Tell us your thoughts in the comments below...