Highways England fitted 175 of the smart road lights to a motorway junction in Merseyside used by 90,000 vehicles a day 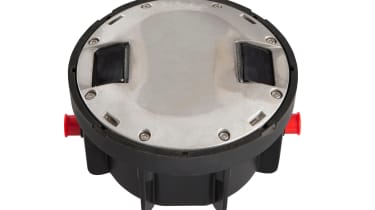 New LED road studs have been installed at one of the UK’s busiest motorway junctions. Highways England fitted 175 of the lights – visible from 900 metres away – at the Switch Island motorway junction in Merseyside to prevent cars from drifting out of their lanes at the traffic lights.

A network of cables under the road links the studs to the traffic lights via a nearby control unit, automatically switching the LEDs on as soon as the traffic signal goes green. While Switch Island is the first junction to be fitted with new LED road studs connected to traffic lights, the Hindhead Tunnel in Surrey is already using them to guide drivers safely from one end to the other.

The lights – which are similar to those found on an airport runway – were implemented at Switch Island as part of a £3 million project to improve safety at the junction, which connects the M57 and M58 with three A-roads, and sees around 90,000 vehicles pass through every day.

The Switch Island project is part of the government’s £220m congestion relief programme. In addition to the LED studs, the junction is being given new traffic lights with a height of five metres, as well as a new road layout, barriers, high-friction surfaces, overhead gantries and a 400-metre cycle path. 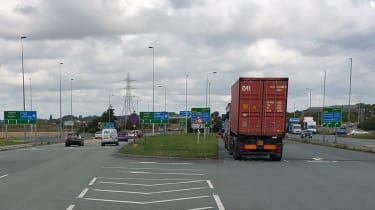 Switch Island saw a total of 49 traffic collisions in the space of two years – equating to an average of one every fortnight. It remains to be seen how much of an improvement the new safety features make when work finishes this winter.

Phil Tyrrell, project manager at Switch Island, commented: “We’ve found that some drivers can start drifting between lanes when they travel through the junction and the new LED road studs are a great way of guiding drivers and helping them stay in the correct lane, avoiding the risk of a collision.”

• How technology could slash road accidents

The studs were developed by Oxfordshire-based firm Clearview Intelligence. Its director of solutions, Andy Salotti, said: “The LED road studs which illuminate in synchronisation with the green traffic signals will provide drivers with clear and enhanced lane guidance through the complex junction.

“This solution will reduce the potential of drivers drifting out of their lane, therefore reducing the number of incidents at a key interchange and the subsequent congestion and increased driver frustration which is caused by such road traffic collisions.”

Road safety is a top priority for all drivers, but which cars are the safest on sale?