The Karlmann King is the world’s most expensive SUV

A common complaint among car fans is that all SUVs look the same. But when it comes to the limited run Karlmann King, nothing could be further from the truth. Based on a Ford F-550, the Karlmann King is designed by Chinese company IAT and built by a team in Europe, with the aim of offering a “stealth” vehicle that provides “an unprecedented visual feast”.

We’ll leave you to decide on how much of a visual feast the Karlmann King is, and on just how ‘stealthy’ it looks, but the angular exterior has drawn comparisons with the Batmobile belonging to DC Comics’ Batman.

At almost six metres in length, the Karlmann King tips the scales at 4.5 tonnes, although optional bulletproofing lifts this figure to a mighty 6,000kg. 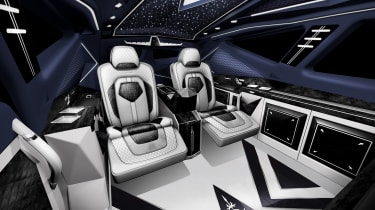 Under the bonnet lies a 6.8-litre V10 left over from Ford’s F-550, although this is said to have been fettled to produce something in the region of 395bhp. The engine is mated to a six-speed automatic gearbox, with four-wheel-drive and air suspension front and rear.

Despite the extra power from the V10, it isn’t enough to overcome the Karlmann King’s tremendous kerbweight, with a top speed of just 87mph possible in the vehicle. This makes it slower than a bog standard Dacia Sandero, and with a reported starting price of £1.56 million, you could afford a fleet of 260 Sanderos while having change to spare.

That said, the opulence of the interior is a sight to behold. The ceiling features starlight headlining akin to that found in the Rolls-Royce Phantom, and the luxury leather seating can be combined with a range of bespoke colour schemes.

Features include independent air con front and rear, a coffee machine, neon lighting, a flat screen TV, electric tables, air purification and a fridge, to name but a few. All of the electric features can be controlled via an in-car app. Entertainment includes a Hi-Fi sound system, a PlayStation 4 and phone projection, with satellite TV available as an option.

Displayed at the Dubai International Motor Show last year, it has been reported that IAT will build fewer than a dozen Karlmann Kings, although we’re yet to hear if the SUV’s entire production run has been accounted for.

What do you think of the Karlmann King? Does it blow the luxurious Lagonda Vision Concept out of the water?