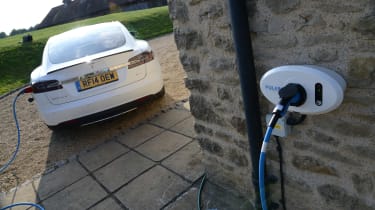 New homes will have to be built with electric vehicle charging points under Government plans to increase uptake of low-emissions vehicles.

Expected to be announced as part of the Department for Transport’s ‘Road to Zero’ document later today, building regulation in the UK will be overhauled to ensure all new flats and offices come with external charging points for EVs.

The strategy also aims to "future proof streets by ensuring all new street lighting columns have charging points in areas with on-street parking." Included are also plans to invest in wireless charging tech for EVs where vehicles would be charged by underground pads without the need to plug in cables.

Transport Secretary Chris Grayling will say today the plan will make “for the biggest overhaul in road transport technology since the development of the Benz patent motor car 130 years ago.

Could you live with an electric car? Here are the pros and cons to life with an EV…