Based on the Lamborghini Huracan, the ARES Panther will cost around £461,000 when it goes on sale later this year 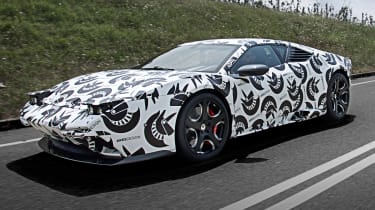 ARES Design has released further details and disguised images of the ARES Panther, its new custom-built supercar. Just 21 will be built at a price of €515,000 each - that’s roughly £461,000.

The Panther takes inspiration from the De Tomaso Pantera, and gains a carbon fibre body which pays homage to the original. Though the car in the images wears camouflage, its long front overhang and sharp nose are clear nods to the Pantera, as is the inclusion of pop-up headlights.

The Pantera’s wedge shape is obvious in profile, while around the back the Panther features slats in the tail lights and engine cover, and four huge tailpipes sprout from the rear bumper. 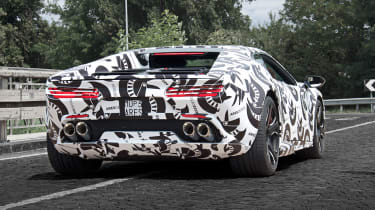 Mechanically, the ARES Panther is based on the Lamborghini Huracan, though both the engine and gearbox have been tweaked, ARES says, to increase performance.

Engine capacity has increased from the Huracan’s 5.2 litres to 5.6, and it produces 641bhp and 560Nm - though those numbers could increase as development progresses. It shares its seven-speed dual clutch gearbox with the Huracan, albeit with revised software.

ARES Design operates out of a facility in Modena, Italy, and was founded by ex-Lotus CEO Danny Bahar in 2015. On the new Panther, Bahar says “This is a really exciting moment for us. Within just six months of announcing the Panther project we have our test car on the road and are ready to present to the world our expression of a car that I dreamt of as a kid. The ARES Panther will be the perfect blend of old school charm and charisma, underpinned with an iconic modern chassis, and clothed in full carbon.”

ARES Design has already begun to design coachbuilt variants of existing cars, such as its own take on the Rolls-Royce Wraith and Bentley Mulsanne. The firm recently announced a new 18,000m² factory in Modena where the new Panther will be assembled.

The main goal of the design team was to create ‘future classics that reflects the essence of iconic cars’. Each Panther will take 24 weeks to build when it goes on sale to customers in the second half of 2018.

Check out the best hypercars on sale in 2018…