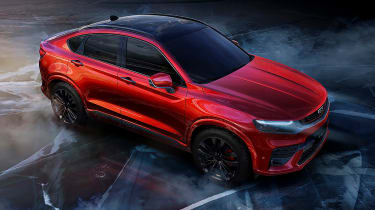 Chinese auto giant and Volvo owner Geely has revealed a new coupe-inspired SUV based on the underpinnings of Volvo’s smallest SUV: the XC40.

Codenamed the FY11, this coupe-inspired SUV is the third model announced this year by the Geely. Along with its recently announced all-electric saloon and new MPV, it will form part of the company’s strategic move into new segments.

The FY11 is built on the Compact Modular Architecture (CMA) platform underpinning the XC40. As such, it will be powered by the same 2.0-litre four-cylinder turbocharged petrol found in the Volvo XC40 T5, producing 235bhp and 350Nm of torque.

The FY11’s full specifications are as yet unreleased but, providing it doesn’t gain too much weight over its sibling the XC40 T5, its performance should be similar. That means a 0-62mph time of around six seconds, a top speed of 140mph, economy figures of around 40mpg and emissions ratings of roughly 160g/km of CO2.

The Chinese manufacturer also says that a choice of front-wheel-drive and all-wheel-drive models will be available, suggesting Volvo’s lower-spec T3 and D3 drivetrains may also be utilised.

Prices are yet to be confirmed, and whether or not the model will be coming to Europe is equally uncertain. However, if Geely’s global product mission for its new all-electric saloon is carried across its range, the FY11 could appear on European roads as soon as next year.

What are you thoughts on the Geely FY11? Let us know your thoughts in the comments section below…