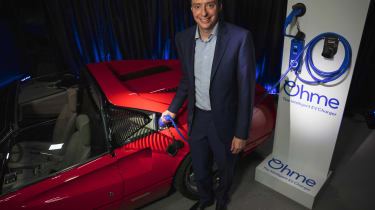 A new home charging device has been launched that could save electric car drivers up to £400 per year. The device from Ohme Technologies Ltd is an intelligent EV home charger that automatically uses the cheapest electricity available. Once the driver plus it in, they are able to control it via a smartphone app equipped with voice recognition.

The charger itself calculates how much power is needed for the driver’s next journey and charges the car accordingly, drawing the most power at off-peak times when electricity is cheaper.

When the charger is used alongside a time-of-use tariff – from Octopus Energy for example, with whom Ohme has made a deal – the cost of running an electric car is around 2p per mile, while the average for most petrol and diesel cars is approximately 10p per mile.

Ohme says that helping drivers charge their EVs at off-peak times not only saves them money, but relieves some pressure from the National Grid when demand is at its peak.

The app gives drivers other options for when their car should charge as well. For example, those who are environmentally minded can choose to only charge when more renewable energy is being used to generate electricity than carbon-based energy. Another option is a feature that reduces the amount of time the battery is at full charge, thus extending its overall life.

The charging unit supports a variety of socket types and costs £399 when bought directly from Ohme or £199 when purchased through Octopus Energy. Shipments to customers who pre-ordered their units have already begun; after the backlog has cleared, standard orders will be delivered within seven to 10 working days after being placed.

David Watson, CEO of Ohme, said: “Electric vehicle drivers have been crying out for an easy to use, cost-effective smart charging solution and Ohme is just that. Not only will we help accelerate the mass adoption of EVs by revolutionising the domestic charging landscape, we will take a lot of the capacity strain and financial stress off the electricity network operators.”

What are the best electric cars on sale right now? Click here for our top 10...