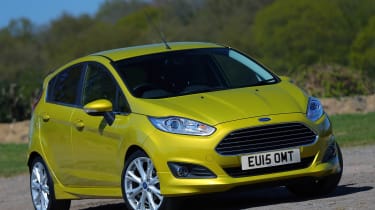 Used car sales in the UK increased 0.9 per cent in the third quarter of 2019, finally bringing to end market trends that have seen nine consecutive quarters of decline.

Some 2,076,382 used cars changed hands between July and September, 18,925 more than in the same period in 2018, according to the latest figures from the Society of Motor Manufacturers and Traders (SMMT).

The biggest boost was for electric plug-in and hybrid models, which saw a 13 per cent sales increase to 37,589 units, increasing its market share from 1.6 per cent to 1.8 per cent.

Superminis remained the most popular segment, making up four of the top 10 best-selling used cars for the quarter; 684,929 changed hands, accounting for 33 per cent of sales.

The Ford Fiesta made its traditional appearance at the top of the sales chart, with 90,428 used examples being sold. Its key rival, the Vauxhall Corsa, followed, with 77,101 second-hand Corsas finding new homes. The Ford Focus was the third most-popular used car to be sold in the third quarter of the year. 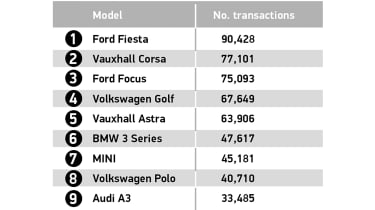 Black, meanwhile, was the most popular colour, followed by silver and blue - 57.1 per cent of used cars sold were in one of these colours.

Orange overtook beige to become the eight-most popular colour, while bronze saw the largest increase of 14.7 per cent, but still only made up 5,132 of the total used cars sold during that period.

Mike Hawes, chief executive of the SMMT, said: “This growth, following a prolonged period of decline, is encouraging and it’s great to see a growing appetite for plug-in and hybrid models as they start to filter down to the used market.

“However, ongoing economic uncertainty and growing confusion over local clean air zones make it difficult to predict the future. To make meaningful environmental gains, we need to get more of the latest, lowest emitting cars on to our roads replacing older ones quickly – and that means delivering the right conditions and policies to give new and used buyers confidence to invest in the vehicles that best suit their driving needs and budgets.”

Would you buy a used car over a new car? Let us know your thoughts in the comments below...