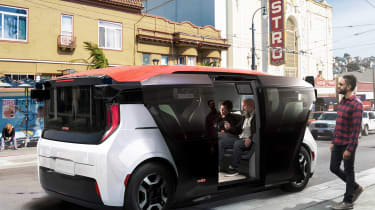 The idea is that, instead of owning your own car, you pay for a seat on the Cruise Origin, saving yourself the trouble of dealing with urban traffic. Eventually, the company aims to have a fleet of vehicles constantly touring around each city, ready to offer transport.

Cruise also assures us that the Origin is far safer than a conventional car, thanks to an array of sensors which can supposedly keep track of obstacles and pedestrians in 360-degree space around the vehicle – even if they’re obscured by rain or fog. 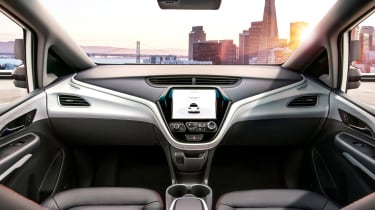 There’s also a high level of redundancy in the vehicle’s autonomous driving system, so there shouldn’t be a single point of failure across the Origin’s sensing and computing network – which is important because there’s no option for a back-up human driver.

The design of the Cruise Origin was led by the company’s desire to maximise passenger comfort and practicality. Styling-wise, it’s little more than a cuboid on wheels – although this has allowed the brand’s engineers to push the seats over the front and rear axles, which they say allows plenty of leg-room for passengers.

The vehicle’s door opening is low to the ground and three times larger than that of an average car, which Cruise says makes it easier for passengers to get into. Also, the doors slide open rather than hinge outwards, making the vehicle safer for passing cyclists and bikers.

As passengers won’t engage with the Origin’s drivetrain, Cruise hasn’t released any details on the vehicle’s power output or performance. Instead, the company focuses on the Origin’s reliability and value, claiming each example will have a life-span of more than one million miles and save each passenger up to $5,000 per year when compared to a normal car.

Pricing information, fare rates and an official on-sale date for the Cruise Origin are all yet to be confirmed. The Origin was originally due to reach the US market at the end of last year, although legislative issues prevented the launch.

What do you make of the Cruise Origin? Let us know in the comments section below...