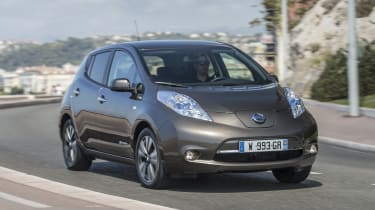 We've known about it for some time, but Nissan has finally revealed the full details of the 2016 range updates for the Leaf. The electric hatchback is set to get a 25 per cent range boost, an updated infotainment system and mild styling tweaks.

We've know about plans to upgrade the battery pack for Nissan's Kia Soul EV rival for some time. The 30kWh pack is now available alongside the 24kWh battery, meaning a range that goes from around 110 miles up to a maximum of 155 miles. The downside is a modest 21kg weight penalty.

Nissan is so confident in the new battery pack's stamina, it will be covered by a full eight-year 100,000-mile guarantee. Charging remains the same process as before, although its not clear yet how much longer it will take to charge to full capacity. 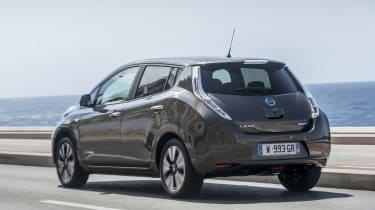 Paul Willcox, Chairman of Nissan Europe, claims the range update "opens the world of EV to thousands of drivers across Europe who before just weren’t completely confident that an EV would work for them". Adding that, "this extra range will make LEAF ownership an easy first choice, for many, many more drivers.”

Alongside the battery revision, the Japanese firm has taken the opportunity to introduce the latest-gen NissanConnect touchscreen infotainment system to the Leaf EV. It features an update to the smartphone app which can remotely pre-heat and cool the Leaf, and is also able to tell you how much range you have left. It also gives details of charging points near you and telss you whether they are operating.

The touchscreen itself also gets a new interface, while a DAB radio and capacitive zoom for the satnav also feature. New exterior colours can be had (like the bronze hue above), while the roof-mounted aerial gets a new design.

Now take a look at our round-up of the best electric cars to buy...