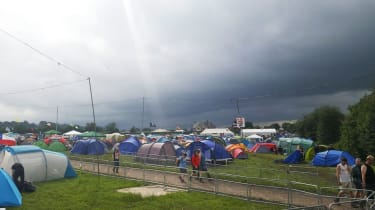 Those hoping to beat the Glastonbury traffic by setting off early will have been left disappointed, as the roads around the festival have become choked with traffic leaving people stationary for hours at a time.

Nearly 200,000 people are expected to arrive at Worthy Farm in Somerset over the next few days, putting immense strain on the local road network. The issue this year is with the vast numbers of people arriving early – founder Michael Eavis says he’s unable to open the car parks before 8:00am, leaving those who hoped to beat the traffic well and truly stuck.

Traffic was so bad that earlier this morning Glastonbury organisers were warning people not to start their journeys until later, while a temporary car park was set up to relieve some of the strain caused by campervans and caravans. Avon and Somerset police closed some roads earlier in the day, too.

Congestion was heavy from the festival site in Pilton along the A361 to West Pennard. There is slow-moving traffic on the A37 north and south of the junctions with the A361. There is congestion south of the A361, too.

Gridlock has hit the local area hard, with residents getting caught up in the congestion. Locals have been forced to take lengthy detours or avoid going out altogether, while services like refuse collection have had to be postponed.

Ticket holders have been venting their frustration online, especially on Twitter, which has exploded with pictures of vast queues of traffic. However, no acts will perform until Friday, so thankfully not much will be missed. This year’s headline acts are Muse, Adele and Coldplay, who will all perform on the Pyramid Stage.

The good news is that the congestion is clearing. The festival gates opened at 8:00am, and while the incredibly muddy ground is delaying things, cars are finally making their way into the festival ground. Police and festival organisers still advise postponing your journey until later, though.

Are you stuck in the festival traffic? Let us know in the comments below...