It's small and boxy, but could you pull off a commute on the Motochimp? 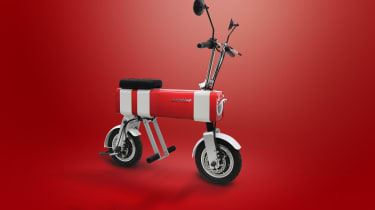 The monkey bike is a creation of the 1960s, but a new miniature motorcycle from Vanda Electrics promises to bring the recipe up to date with an electric twist. Called the Motochimp, it’s an oddball looking mini bike kitted out with an all-electric powertrain, and its makers claim it’ll be perfect for nipping around city streets.

Inside is a 48V 350W electric motor powering the rear wheel. Top speed is pegged at 19mph, but the claimed 37-mile range makes it more than a toy, and the lithium-ion battery charges in just 60 minutes from a standard plug socket.

The cuboid bodywork is made from aluminium alloy, and it’s available in three colours – yellow, blue or red.  It sits on top of a wheelbase measuring in at 750mm, and the entire bike is just over one metre long. 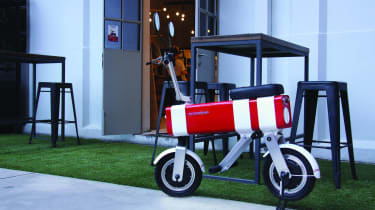 At a glance the Motochimp looks like a fairly basic set-up, but there is some on-board equipment. A small speedometer is attached to the handlebars, and the key is replaced by a digital set-up – hover the digital key over the transponder and the bike is ready to ride.

Under the seat is a small storage compartment too, but it’s intended as a cubby for the charging cable.

The bike is from the same Singaporean firm behind the Dendrobrium – a vapourware electric hypercar with a claimed 1,500bhp. Unlike firm's obscenely powerful Ferrari-crusher, though, the Motochimp will definitely see the light of day. It’s set to go on sale exclusively in Japan first, but a UK launch is planned further down the line. Prices have only been given in US dollars for the moment, and Vanda says it’ll cost from $2,000 (£1,600).

Would you ride around town on the Motochimp? Let us know below...