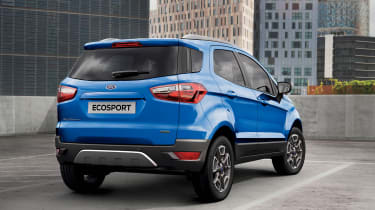 The Ford EcoSport SUV has been given a series of mid-life tweaks to make it more appealing to potential buyers. The changes include a new four-inch colour screen, partial leather seats and the option to delete the awkward rear-mounted spare wheel in favour of a tyre inflation kit.

Ford has also announced prices will start from £14,245 – or around £700 less than before. All engines are now EU6 compliant, with the frugal 1.5-litre TDCi diesel offering a 5bhp improvement, while also boasting better fuel economy and lower emissions.

As a result, the diesel now returns 64.2mpg and emits 115g/km – up and down from 61.4mpg and 120g/km respectively. Performance figures remain the same, though an extra 10Nm of torque is likely to make it feel punchier in-gear.

The two petrol engines – a 1.5-litre and 1.0-litre EcoBoost turbo – remain the same, with the latter returning a respectable 52.3mpg.

Inside, Titanium models get part-leather seats, while all cars now benefit from a four-inch colour screen and SYNC infotainment system. Ford says sat-nav and a reversing camera will be offered later in the year, though prices have not yet been confirmed.

A Winter Pack is also now available, adding a heated windscreen, heated mirrors and heated front seats. It also adds vents in the back for improved rear seat comfort.

Not content with the styling and equipment enhancements, Ford claims the new EcoSport is better to drive, too. This is thanks a stiffer rear suspension setup, claiming a greater degree of body control. A 10mm reduction in ride height lowers the car’s centre of gravity, while the stability control and steering have allegedly been tuned for European roads.

The new Ford EcoSport is available to order now, with first deliveries in October. 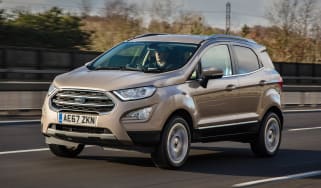